Left Wing, Right Wing, Whatever -- Vote (And Then Eat) 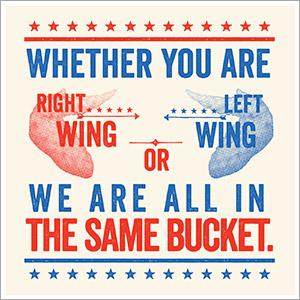 With the contentious U.S. election coming to an end, Young & Rubicam NY (Y&R) is introducing a new project to bring together divided voters.

Two Y&R creative directors, Nathalie Brown and Kate Lummus, decided that nothing unites people more than food so they are teaming with restaurant chain Dinosaur Bar-B-Que to introduce a special Election Day menu and event.

On November 8, all nine East Coast Dinosaur Bar-B-Que locations will offer an "Election Wing" menu that features “Left Wings,” “Right Wings” and the “F*ckIt Buckit” combo of both for the undecided.

The two creatives first developed the concept and then pitched it to the chain because of its communal ambiance and top-rated food.

The concept is designed to help overcome election fatigue by showing that Left and Right wings are all part of the same chicken.

The promotion is supported through social media with the hashtag #allinthesamebucket as well as via the restaurant's own channels. The agency also developed a teaser video to help spread the word.

This is the first time Y&R has developed a specific Election Day-themed project.

The agency says it usually doesn't get involved in political campaigns, but thought this was a fun non-partisan initiative.