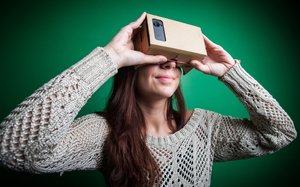 There are a lot of virtual reality headsets coming, which will cause a lot of money to change hands.

Next year is now seen as the biggest year for console-based VR revenue, based on a new study.

That growth will be driven by several new units coming into the marketplace, according to the study by Juniper Research, which excluded augmented reality from this report.

Of course, virtual and augmented reality are different, though they often are lumped together in research reports.

Juniper defines augmented reality as ‘a technology that identifies and tracks data from the physical world, in combination with data drawn from digital sources, to present the user with a view of the physical world overlaid with relevant computer-generated information.’

The researchers correctly tagged virtual reality interactions as being within an entirely computer-generated world.

The new forecast is for there to be nearly 60 million smartphone VR headsets shipped in 2021, an increase of about 240% from about 17 million this year.

And here’s the catch regarding money changing hands: the lower price of these devices means they will account for only 7% of hardware revenue.

Millions of consumers already use VR on smartphone-based headsets, such as Google Cardboard and Samsung Gear VR.

However, developers must move beyond simple experience-based apps to create compelling content to keep consumers engaged, according to Juniper.

The other catch in following the VR money is that fewer than 5% of apps downloaded for smartphone VR are charged for at the point of purchase, with in-app purchases being much more common.

Juniper suggests that the best opportunity for smartphone VR is in providing subscription media, from film series to news broadcasts, to supplement existing online services.

And then money cam change hands on a recurring basis.