The Vote Is In: Transparency Crosses 'Party' Lines: Clients, Agencies Agree 4As Is Right

Following a year in which the rancor and partisanship in the U.S. ad industry was second only to the U.S. presidential race, it turns out there is much more unity surrounding issues of media-buying “transparency.” While it likely is a far less scientific process than the U.S. electoral process, a survey of ad industry executives shows that far more side with the American Association of Advertising Agencies' (4A’s) transparency “principles” than agree with the Association of National Advertisers' (ANA) recommendations.

Importantly, those views are held almost equally among advertisers as they are among agency executives polled in October by Advertiser Perceptions Inc. for MediaPost. While the survey, which was conducted online among 303 ad executives (60/40 agency/marketer) is not necessarily representative or projectable, it suggests that industry views over transparency may not be as simple and clear cut as some may have thought.

By a margin of nearly two to one, more industry executives believe the 4A’s transparency principles are right. And while agency execs indexed slightly higher than marketers on that response, the margin was essentially the same for both sides, suggesting the views are far less partisan than might have otherwise been thought.

That said, roughly a third of all respondents believe both associations should remain “neutral” on the subject, while roughly the same percentage believe the rancor will get worse before it gets better. 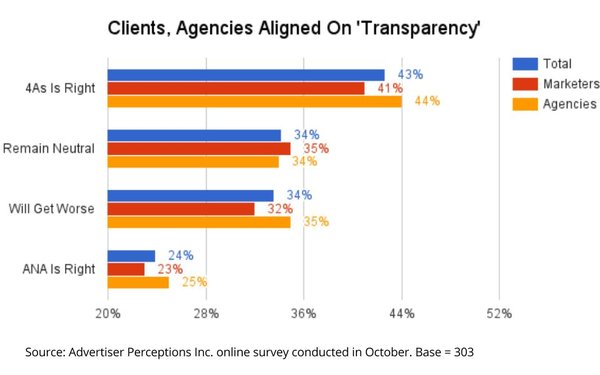