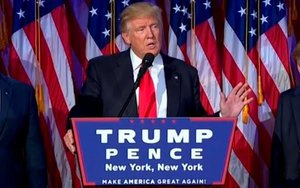 Most of the news media seemed to favor Hillary Clinton for president in this campaign, so when Donald Trump won, it came as a huge shock.

The best evidence of this is the widespread framing of Trump’s victory on the morning after as an “upset,” as if he had a snowball’s chance in hell of winning, and miracle of miracles, he came out on top. But as far as I could tell, the gap between Trump and Clinton in the days leading up to Election Day was relatively narrow, even if she was ahead in some polls by a few percentage points. An “upset”? Only if you assumed Clinton would win and then were stunned when she didn’t.

Yes, Trump won by a close margin. It was so close that it took until the wee hours of Wednesday morning for the TV networks to call it. Trump gave his acceptance speech (pictured above) at around 2:30 a.m.

It then took only several hours after that for the intelligentsia to mount their high horses and post columns that declared the outcome to be “an American tragedy” (David Remnick, editor of The New Yorker) and “the end of the romantic vision of America” (Paul Krugman on NYTimes.com). My goodness!

On CNN.com, one of the videos you could watch this morning was one titled “Emotional Van Jones: ‘How do I explain this to my children?’ ” Jones is a social activist -- an African-American who is seen regularly as a commentator on CNN. “It’s hard to be a parent tonight,” he said on CNN last night. He then indicated that he thinks Trump is a bully and a bigot whose victory in this presidential election is difficult to explain to his children.

My suggestion: Tell them we had an election and under our system, when the votes were tallied, Trump had enough of them to meet the requirements of the electoral college and thereby beat Clinton. Sure, there might be a lot more to it, but at the same time, that’s all there is to it.

Trump’s victory is a slap in the face to the many members of the media establishment who feel they know everything. They feel this way because the people they are in contact with the most are their own kind -- namely, other people in the news media. The media establishment today are “insiders,” just like the political class they cover. To many Americans, the media and political establishments are one and the same. I pointed this out in a TV Blog back in May.

You might say Trump's victory is as much a repudiation of know-it-all media types as it was the political establishment. Think about it: For months and months, we have had dozens of pundits and commentators on the news channels every day and night for hours on end making predictions, telling us what the electorate was like, and what “the American people” are thinking. The last thing the “experts” expected was a Trump win.

And yet here we are. Among other things, Trump's victory reveals that the so-called experts who chatter away so confidently on television every night about politics and social trends are in reality a bunch of know-nothings. They missed the boat on this one.

As for the Election Night coverage, at least no network projected a winner prematurely, although it was interesting throughout the evening to note the varying electoral-vote tallies from network to network.

The variations were due to decisions at each network to either call certain states for either candidate or hold off. In that regard, Fox News Channel seemed more eager than some of the other networks to call some states for Trump. However, none of the Fox projections for Trump turned out to be wrong, so you might conclude that maybe Fox had the most accurate apparatus available for making projections.

The challenge for all the networks was filling all the airtime between the hourly poll closings and the projections they were hopeful of making as various polls closed. Much of it seemed to be endless -- and largely impenetrable -- blathering about this or that county or the ethnic makeup of the electorate in various states, compared to four years ago.

Much of it was dull too. That may have been because many in the TV news media were as shell-shocked and subdued as the Clinton supporters seen on TV at the Javits Center in New York City as the realization sank in that their candidate might lose.