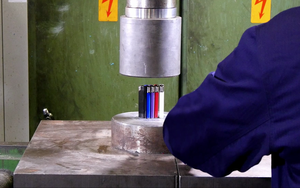 Blue Cross Blue Shield Association (BCBSA) and its agency mcgarrybowen are launching the health insurance provider's first campaign in the online video space. The campaign coincides with the open enrollment period for healthcare which kicked off November 1.

The "Fearless Nation" creative is based on the concept that health insurance is more than just sick insurance and that an ounce of prevention is worth a pound of cure, according to the agency.

The Flossing ad, for instance, shows gym goers engaged in boot-camp-type exercises until an instructor directs them to the last station, flossing, noting that 80% of people don't floss. Yet doing so can ease heart disease. These athletes express amusement that this activity is the most important of all of their exercises.

Other topics tackled in this wellness campaign include sleep, balance and sitting.

The videos run across digital and social media. The effort started with a Tumblr page and then spread via YouTube and all social media platforms. In addition, a paid media strategy targets specific interest groups — teachers, CrossFit and other fitness enthusiasts — most likely to find the video content relevant and compelling.

The site for all of the content in the campaign can be found here. BCBSA is the national federation of 36 independent, community-based BCBS companies that provide healthcare coverage for more than 105 million people, or one in three Americans.