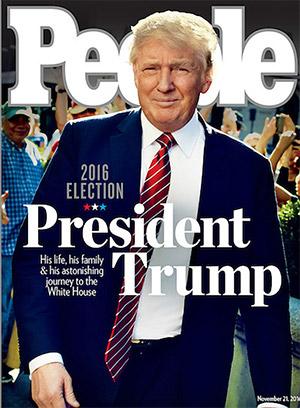 If you’ve seen the videos of people crying over Donald Trump’s election victory, you already know how delicate some Americans are when it comes to politics. In fact, some folks are apparently so sensitive they can’t even look at a picture of the man.

That’s the lesson People magazine is learning as it endures a wave of criticism, and even threats of a reader boycott, for daring to publish a cover story about the president-elect, with the teaser: “His life, his family & his astonishing journey to the White House.”

At first glance it might seem reasonable, indeed inevitable, that a major American magazine would publish a story about the country’s next president.

However, the main complaint seems to be the magazine gave him a “sympathetic” portrayal in the latest article, in contrast to the scathing treatment meted out in a previous article by a former People reporter, Natasha Stoynoff, who recounted an alleged assault by Trump in 2005.

The latest article doesn’t steer clear of the controversy, mentioning Stoynoff’s story briefly, but it mostly focuses on the details of Trump’s background and biography – again, pretty much as you might expect in a profile of a politician published in a celebrity magazine.

Indeed, it’s hard to imagine any other approach the magazine could have taken.

People isn’t an overtly political publication, and an article rehashing all the reasons readers should dislike Trump would simply be redundant, considering his massive notoriety. Is there anyone who somehow missed the entire presidential campaign over the last year and a half? Do we really need to be reminded, yet again, of Trump’s many questionable character traits?

Moreover, given the gracious concession speech by Hillary Clinton and the civil reception offered to Trump by President Obama, both of whom emphasized the need for all Americans to give the president-elect a chance to lead, People’s neutral coverage seems perfectly reasonable.

There will be plenty of time to excoriate and eviscerate Trump in the years to come. But asserting that there can be no coverage of him that is anything other than relentlessly critical is petty and pointless.