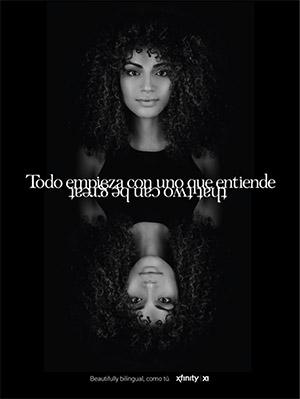 Comcast and its agency Grupo Gallegos are introducing a bilingual campaign to raise awareness that the Xfinity X1 Voice remote works in both Spanish and English. By saying a command into the remote, consumers are able to toggle between English and Spanish (or “Spanglish”), at any time or even within the same sentence.

Rather than introduce a straight-forward educational initiative, the creative promotes a message of racial and cultural unity with the tagline, “beautifully bilingual, como tú,” (beautifully bilingual, like you) – "a mantra created to reflect Comcast’s efforts to put people first and create meaningful conversations," says the agency.

Coming in the wake of the elections and the heated debate over immigration and Trump’s proposed border wall, the campaign is designed to create a message about optimism to highlight the biculturalism of millions of U.S. Hispanics.

In a TV spot, a bicultural Hispanic man is seen walking the street and he then multiplies to showcase the duality of his identity and language. The young Hispanic men say, “Como tu.” (Like you). “You know it’s true. Dos idiomas son mas.” (Two languages are more). “And it’s getting big, we’re reaching critical mass. Nuestro mundo de dos mundos sera el mundo.” (Our world of two worlds will be the world.).

One young Hispanic man then states, “See, the world I envision has no division. Creo que empieza con uno” (I believe it starts with one).

The campaign launched during the 2016 edition of Telemundo's Latin American Music Awards on October 6 and will continue to run up to the Latin Grammy ceremony on November 17th and the final weeks of Univision’s reality show “La Banda” on December 11th.

A national print effort is set to launch in the upcoming December/January issue of People en Español.  Digital components, continue to highlight the language choice feature on Xfinity X1 and will run through the end of the year.