'The New Yorker' Greets Trump With A Wall 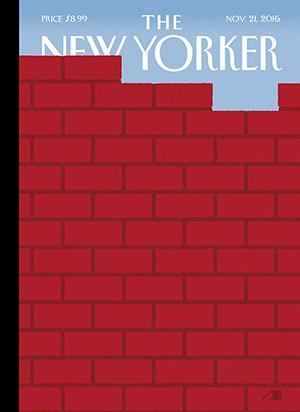 Donald Trump’s upset victory in the 2016 presidential election has provoked shocked responses from the mainstream media. Nowhere has this been more evident than in magazine covers.

One particularly pointed image comes from a title long famous for its pithy covers, The New Yorker.

The first issue after Trump’s election features a cartoon by Bob Staake, showing nothing but a brick wall under construction but almost complete, leaving just a sliver of hopeful blue sky peeking out at the top – before it, too, will disappear.

The cover sums up the feelings of Clinton supporters who “felt as though we had hit a brick wall, full force” according to the magazine’s art director, Françoise Mouly.

It is also a reference to Trump’s oft-repeated promise to build a wall along the Mexican border, which has become shorthand for an era of renewed nationalism and rising barriers to trade and immigration.

New Yorker editor David Remnick commented: “To combat authoritarianism, to call out lies, to struggle honorably and fiercely in the name of American ideals – that is what is left to do. That is all there is to do.”