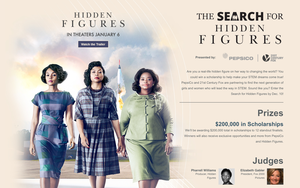 PepsiCo and 21st Century Fox have launched a campaign that combines a movie tie-in and cause marketing.

The companies are sponsoring a scholarship contest tied into Fox’s “Hidden Figures,” which tells the story of three African-American women who were behind-the-scenes NASA heroes in the “Space Race” of the 1960s. The movie is set to premiere Jan. 6.

The “Search for Hidden Figures” contest aims to identify females interested in or pursuing careers in science, technology, engineering and math (STEM) and support their success.

The contest is offering $10,000 university or vocational scholarships for 10 finalists, and $50,000 scholarships for two grand prize winners, along with other prizes such as access to New York Academy of Sciences (NYAS) training programs and trips to the Kennedy Space Center in Orlando.

Females 13 and older who are U.S. residents are eligible to enter on the contest site until Dec. 10, by answering essay questions. Those chosen as semi-finalists must submit videos to continue competing. The videos will be judged by the movie’s producers, Pharrell Williams and Donna Gigliotti; Fox 2000 president Elizabeth Gabler; and NYAS president Ellis Rubinstein.

PepsiCo is promoting the contest with a national TV and digital campaign.

A video featuring the film's lead actress, Taraji P. Henson, went live today on YouTube (below) and PepsiCo’s other social channels. It will make its television debut on Nov. 16 on Fox’s “Empire,” which also stars Henson.

The campaign site offers a movie trailer and exclusive behind-the-scenes footage; messages of encouragement from the movie’s actors (who also include Janelle Monae and Octavia Spencer); and a collection of STEM mobile and web games, quizzes and challenges, including a DNA strand puzzle, a sustainable farm simulator, and an HTML coding quiz.

According to PepsiCo, the contest is part of the company’s investments in helping to address the shortfall of STEM professionals as a whole, and females in particular, who currently make up just 24% of the STEM workforce. PepsiCo, which says it views STEM talent as crucial to its own future innovation and growth, was founding chair of the STEM Innovation Taskforce and is an ongoing supporter of NYAS’s Junior Academy of Sciences.