Ho Ho Hooking Up Grandma's House For The Holidays 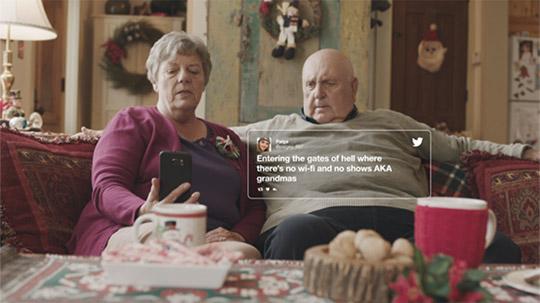 Comcast's Xfinity holiday campaign with 72andSunny illustrates how technology can bring families closer together during the holidays.

The campaign centers on a two-minute film, titled “Hooking Up Grandma’s House,” that begins with real-life grandparents reading tweets from grandkids lamenting having to spend the holidays in their grandparents’ archaic living rooms — no WiFi, streaming TV or shows.

To prove them wrong, one couple calls Xfinity to install Xfinity X1 so the grandkids won’t be unconnected during their holiday visit.

“But we hoped to find extended families,” says Bryan Rowles, partner, executive creative director, 72andSunny. "Our mission is to help people see Xfinity as the best and most modern home entertainment brand. And put it in a real and relatable context."

Xfinity has often featured "real people" in its ad campaigns. This summer, for instance, the X1 Challenge featured spokesperson Chris Hardwick challenging non-actors to see the benefits of its various services.

In addition to the two-minute spot, the integrated campaign includes 90-, 60-, and 30-second clips. There are three 15-second ads which focus on individual Xfinity features, like the newly introduced Netflix integration and Voice Search abilities.

There are also three teaser 15-second spots featuring "outraged" grandparents reading tweets from their grandkids for the first time.