NBC Kicks Off NFL Campaign With Stars From Its Shows 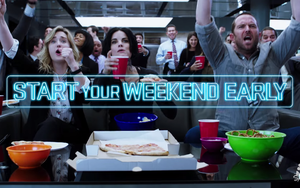 NBC this week breaks a multi-media campaign for “Thursday Night Football” called “Start Your Weekend Early” and anchored by a series of spots featuring stars from such NBC shows as “The Blacklist,” “Blindspot,” “Law & Order: SVU,” “Superstore,” “The Voice” and the network’s trio “Chicago Fire/Med/PD.”

The campaign also includes a generic spot, “Weekends Are Tough,” plus a spot that features characters from the animated movie, “Sing,” hitting theaters in December (from NBC siblings Illumination Entertainment and Universal Pictures).

Each spot was created with customized content in which actors from the respective shows stay in character while watching NFL action.

The premise: “The work week can be tough, so what would be better than to start your weekend early with NBC Thursday Night Football.”

Even though the NFL this season is dealing with lower-than-usual ratings across its prime time broadcasts, NBC’s “Sunday Night Football” has consistently been atop the overall ratings, regularly attracting 16-18 million viewers, with Sunday night’s Seattle Seahawks-New England Patriots game pulling in more than 22.5 million viewers.

NBC will seek to match that success under a two-year deal signed with the NFL this past February.

According to Jennifer Storms, CMO for NBC Sports Group, “As the only network with two primetime NFL packages, we wanted to distinguish ‘TNF’ with the proposition that millennials start their weekend early. And what better way to reach millennials than with the casts of their favorite shows watching ‘Thursday Night Football’ within customized spots produced by the shows themselves.”

In “TNF: The Voice,” Blake Shelton and Adam Levine bicker as usual, but agree that “rooting for the same team” on Thursday night “isn’t such a bad thing.” In “TNF: Blindspot,” Sullivan Stapleton, Jamie Alexander and crew see a mysterious tattoo on a woman’s shoulder but, unlike the premise of the show (in which the FBI is using tattoos to solve a mystery), this leads to the “TNF” broadcast.

In “TNF: Superstore,” the cast ignores the request of a customer who needs help so that they can stay glued to a bank of TVs showing the NFL. In “TNF: The Blacklist,” James Spader refuses to take a call from the FBI because he is engrossed with football on TV.

In the generic spot, people are having such rough work days (spilled coffee, missed meetings) they can’t wait for the weekend to begin with “TNF.”

In February, the NFL said it would broaden its “Thursday Night Football” platform, which began in 2006 on NFL Network and expanded to broadcast TV on CBS in 2014, to include NBC, with NBC and CBS getting five games each (all simulcast on NFL Network) and NFL Network getting an eight-game exclusive package. The new two-year deal (2016-17) was valued at $225 million per year for each network.