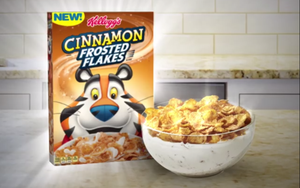 Hoping to build on recent sales gains for the brand, Kellogg is debuting a cinnamon variety of Frosted Flakes.

Cinnamon Frosted Flakes, launching in Walmart this month before being rolled out nationally in January, was developed in response to consumer demand for a cinnamon variety, Brad Schwan, senior director of morning foods marketing for Kellogg N.A., tells Marketing Daily. “It was the #1 most-requested flavor,” he says.

A previous cinnamon version, Tony’s Cinnamon Krunchers, was pulled from shelves after two years in the market in the mid-1990s.

But Kellogg is confident that they’ve got it right this time.

Product development, guided “100%” by consumer testing and input, has been underway for about a year, reports Joanna Grennes, Kellogg’s senior director for morning foods R&D. During that time, more than 100 variations were formulated and considered, she says.

The resulting product uses korintje cinnamon that is “enveloped” within the frosted coating, rather than just dusted on top, notes Grennes. (Fans said that dusting resulted in the cinnamon being washed off when milk was added, she explains.)

The launch’s budget, while not being divulged, is “substantial,” says Schwan — reflecting what Kellogg is calling the “most anticipated innovation in Frosted Flakes’ nearly 65-year history.”

A full advertising campaign, including a Tony the Tiger sampling tour, television from Leo Burnett, digital components from VML, and use of social influencers, will launch in January.

The cinnamon variety’s marketing will continue the brand’s core targeting of dads and tweens, consistent with its “Let Your Gr-r-reat Out” campaign, launched this past summer, confirms Schwan.

That campaign helped drive Frosted Flakes’ largest quarterly sales gain in more than three years, returning the brand to growth, he reports. Given the continuing sales declines for most cold cereals, any growth is notable.

Other Frosted Flakes varieties currently available in the U.S. (excluding a fairly long list of international varieties) include Energy Clusters, a version with marshmallows, and a chocolate-flavored version called Choco Zucaritas. Discontinued varieties that were offered in North America at various times over the past several decades have included banana, cocoa and Whole Grain Tiger Power (enriched with protein, fiber and calcium).