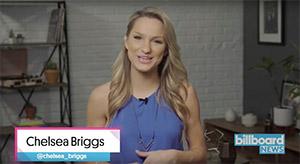 The series is part of Billboard’s larger efforts to produce more video for its audience. For example, the publisher plans to air more than 1,000 Facebook Live broadcasts over the course of the next year.

It will be hosted by Chelsea Briggs and Kevan Kenney.

The show will release four 60- to 90-second episodes every day across 10 platforms, including Billboard.com, Facebook and the new "Billboard News" YouTube Channel.

The videos will also be distributed across Twitter, AOL, Yahoo!, Condé Nast, MSN, Bloomberg and AP.

Billboard plans to release around 1,500 “Billboard News” videos over the next year.

Each episode is “snackable” and focuses on one story, according to John Amato, co-president of The Hollywood Reporter-Billboard Media Group.

“Music fans today are hungry for minute-by-minute coverage about the music they love, delivered to wherever they are, in a format tailored to meet the needs of their fast-paced lives,” added Michael Palmer, general manger of video for The Hollywood Reporter-Billboard Media Group.

When asked what inspired this video brand extension, Amato told Publishers Daily: “We believe there is a big hole in the market for music news that isn’t ‘gossip’… We are also finding that new audiences, younger audiences and more mobile audiences are interacting with our video products, which is opening up totally new outlets for us.”

“Just like our magazine, Web site, live events, podcasts and more, we are looking for ways to extend the Billboard brand using video across a wide variety of platforms,” Amato said.

He added that Billboard aims to drive time spent viewing its content, as well as video views.

“The show is launching to fill a need for inventory, and we have plans to work with advertising partners to sponsor episodes or our coverage around tent-pole events like the Oscars, Grammys, film festivals or music festivals,” he said.