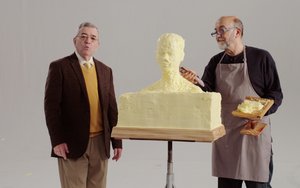 Real farmers star in videos from Organic Valley promoting butter as being nothing to fear from a health perspective.

The farmer-owned cooperative of more than 1,800 organic family farms, is launching a holiday campaign that defends the long-demonized ingredient.

Created by the Chattanooga, Tenn.-based Humanaut agency, a long-form video details the true story of how butter and fats were once blamed for every negative health trend from obesity to heart disease.

The “solution” was an increase in butter replacement spreads and sprays made from artificial ingredients and the increase of low-fat and fat-free foods that often upped their carbohydrate quotient (sugar) to compensate for flavor.

The campaign also includes 15- and 30-second videos with outtakes from the long video and a live-streaming website where the farmers will be sculpting the faces of our nation’s “War on Butter Heroes” in real time out of Organic Valley’s organic, pasture-raised butter.

The effort kicked off with a sculpture of George Siemon, a founding farmer of Organic Valley and “CEIEIO” of the pioneering cooperative. Through Nov. 22, the public can nominate their own “butter heroes” via Twitter and invite friends and family to vote for their favorites. Each day’s winner will also be sculpted in real organic butter.

“We hope people will be entertained by the video and share it with their friends,” Goldstein tells Marketing Daily. “People are also learning about the campaign through the ‘Butter Hero’ nominations on Twitter.”

The campaign is aimed at anyone who has heard that butter is bad for you these last 60 years, he says.

“More specifically, we are talking to bakers and people cooking for their family this holiday season,” Goldstein says. “We want them to know that butter is back, and Organic Valley's award-winning butter is the best way to take your holiday recipe to the next level.”