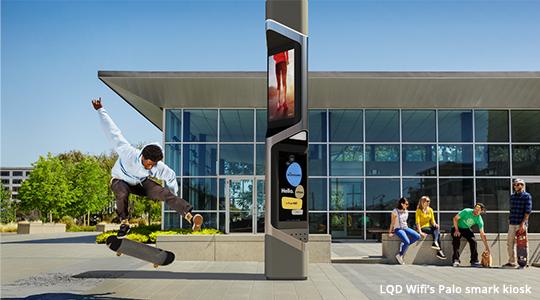 More smart kiosks may be coming to cities, thanks to a new move by a major network.

The company’s Palo hub appears to offer similar functionality to the already installed LinkNYC connected kiosks in New York City, which include free public Wi-Fi and other connected services, powered by display advertising on the kiosks themselves.

“This transaction uniquely positions us to utilize our infrastructure, platforms and network at scale to deploy engaging community technology hubs that connect, inform, inspire and support people where they live, work and play."

In LinkNYC’s case, the advertising opportunities have been well-received. For example, Initiative recently won a silver CLIO award for its Shazam and Coors Light campaign, which centered around using the kiosks for interactive engagement.

The kiosks, which were equipped with beacons, could trigger nearby consumers’ smartphones to engage with the music playlist playing from the kiosk. Consumers could tap into the playlists via Shazam, which included integrated Coors Light advertising across the experience in the app and on the kiosk displays.

In Verizon’s case, engagement is a driving force behind cities adopting smart kiosks, according to Randy Ramusack, founder and CEO of LQD.

"We designed Palo, from day one, to be part of the community, offering Wi-Fi, public safety features and a unique, interactive community engagement platform,” Ramusack said in a statement.

Sensity focuses on integrating smart sensors into LED lights to be able to connect them to communicate with each other to create a large-scale IoT network and platform.