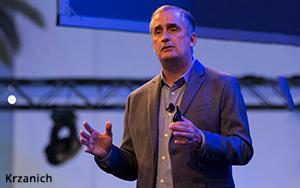 Autonomous cars are about data and content, and both are coming on strong.

Most consumers may not be waiting in line to buy an autonomous car but that doesn’t mean a lot of money isn’t flowing into the development of them.

The latest financial boost is coming from Intel, to the tune of $250 million, according to Intel CEO Brian Krzanich, who announced the spend at the AutoMobility show in Los Angeles yesterday as well as in a blog post.

However, the focus of the investment is not on actual cars but rather on the data that will be generated from connected vehicles.

“As a technologist, one of the trends I see as most disruptive to almost every industry is the enormous flood of data driven by the proliferation of smart, connected devices,” Krzanich said.

He estimates that every autonomous car will generate the data equivalent of about 3,000 people.

Put another way, each vehicle will be generating 4,000 gigabytes (4 terabytes) of data a day, combining it from cameras, GPS, sonar and radar.

Key for marketers is personal data.

Intel notes that there will be data that tracks how many people are in the car, music preferences of each passenger or even what stores or brands passengers prefer and, when they are near them, tee up sale items.

“Wearables and other sensors inside the car can also monitor behavior, focus, emotional and biometric status to increase safety and security,” says Krzanich. “Whoever has the most personal data will be able to develop and deliver the best user experience.”

There are three challenges around data, according to Krzanich. There’s the size of data sets, the intelligence cycle needed to process the data and then, of course, security.

Intel views data as the new currency of the automotive world.

And now they’re putting up $250 million in real currency to help drive that world forward.