How Much Is That Urkel In The Window? On Ebay, Not Much 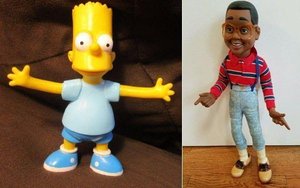 Urkel has bitten the dust.

I finally realized recently that he wasn’t worth anything, although once upon a time this 17-inch talking Steve Urkel doll held at least a smidgen of sentimental value for me. I had owned this ungainly piece of Urkelania for 25 years, ever since it was mailed to me by a publicist for Hasbro as an apparent thank-you for a story I had written about Urkel and the 14-year-old actor who played him on “Family Matters,” Jaleel White.

It was after my first encounter with him, which took place in June 1991 at the toy trade show in New York known as the Toy Fair. Ever since then, and up until recently, this talking nerd doll had taken up space, first in a series of desk drawers, then in a variety of storage boxes and finally a closet shelf.

To make him talk, you would pull a ring attached to a string in his back and he would utter one of three Urkel catchphrases: “No sweat, my pet!” “Got any cheese?” or “Did I do that?” There was a fourth option too -- Urkel’s trademark laugh, a “Hee-hee-hee” followed by a snort.

In recent years, the doll’s talking function had all but ceased, and seeing him perched on my closet shelf every time I went to get a shirt was becoming unnerving, like he was about to come alive like Chucky in the “Child’s Play” movies. So out he went, but not before I made one last check on Ebay.

This exercise confirmed my suspicion that making an effort to sell this Urkel doll on Ebay would be a fool’s errand. There are plenty of them for sale on the auction site, ranging in price from $8, for a specimen from which Urkel’s oversized glasses had gone missing, to around $30 for a doll in its original package.

This is supposedly important to collectors of these things -- that they come with the packaging they were first sold in. Oh, well. My Urkel package was long gone, which I didn’t regret because if I’d left him in his package, how would I have ever gotten to play with him? The doll might be nearly worthless, but the memories? Priceless.

Tossing Urkel into the dustbin of my personal history got me thinking about all the other hundreds, if not thousands, of promotional items sent to me over the years. I once had drawers full of this stuff -- gewgaws of every description sent out by networks and other program providers (such as studios and syndicators) to promote their new shows.

There were t-shirts, hats, hoodies, sweatpants and jackets; towels, tote bags, blankets and bobble-heads; glassware, dishware and cookware -- all with a show title or network name painted, etched, silk-screened or sewn on them. There were multi-use pocket knives, specially made snow globes, at least one pair of boxer shorts, and enough coffee mugs to supply a catering service.

At Halloween and Christmas, there were baskets of chocolate, cartons of cookies and great tins filled with popcorn. TV Land once sent out a Chia Pet planter in the shape of Mr. T’s head (its tiny plants grew in the shape of his famous Mohawk).

The short-lived “Chevy Chase Show,” a late-night show which lasted all of five weeks on Fox in 1993, sent over a promotional pillowcase with Chevy’s face on it. That show was such an infamous, spectacular failure that promotional material from its launch must be rare indeed, and I sometimes regret discarding that pillowcase -- but not too much.

At some point before the newspaper where I once worked was due to move from offices in lower Manhattan to new digs in midtown, I had about a dozen file-sized desk drawers filled completely with promotional doodads -- like a hoarder on an A&E show. It was then that I divested myself of them, positioning them on a communal countertop where scavengers swiftly snapped them up.

Over the ensuing years, I continued to receive hundreds of items every year but I gave them away. I was afraid the apparel would make me look like a walking billboard for the TV industry. And I didn’t like cluttering up my kitchen cabinets with mismatched coffee mugs either.

Now, very little is left -- a bendable rubber Bart Simpson, a Gumby, an Ultraman action figure (still in the box), a Mr. T transistor radio (yes, you read that correctly).

Of all the thousands of TV shows I have received in my career on VHS and DVD, I have kept only one -- the final episode of “The Sopranos,” titled “Made in America,” sent over by HBO.

How much can you get for that one on Ebay?