How Have The Media Times Changed? The 'AP Stylebook' Knows 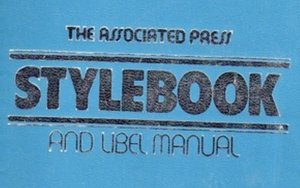 In 1977, according to the AP style guide I still occasionally refer to, using the acronym “TV” as a noun when writing about television was not advised.

“Acceptable as an adjective or in such constructions as cable TV [italics theirs]. But do not normally use as a noun unless part of a quotation,” counsels the item on “TV” in the 1977 edition of the AP Stylebook -- formerly titled “The Associated Press Stylebook and Libel Manual.”

Today we use “TV” and “television” more or less interchangeably as nouns, although the former is probably used more now than the latter. One thing the 1977 Stylebook reveals, however, is that “media” -- whether electronic or otherwise -- was not nearly the obsession for news organizations that it is today.

Part of the reason was that the world at large was not nearly as obsessed with media and technology -- and the companies responsible for them -- as we are now. There was so much less of it then too, obviously.

The word “media” did earn its own entry, however. “In the sense of mass communications, such as magazines, newspapers, the news services, radio and television, the word is plural,” says this item whose list of “mass” media, circa 1977, is quaint indeed. As for the word itself, today you see it applied both as a plural and a singular word.

The 1977 Stylebook offers no guidance on how to report on Nielsen ratings -- which were expressed then in ratings and shares. A young reporter learned how to report on this data on his own, or with the begrudging assistance of an editor or other co-worker. The same went for Arbitron radio ratings, which were even more byzantine than the Nielsens. The AP Stylebook ignored the Arbitrons too.

Radio and TV station call letters got their own entries, however, as did the names of the major TV networks -- all three of them. ABC, CBS and NBC were acceptable “in all references,” the book said. Mutual Broadcasting System is in the book in an item that notes “Mutual Radio is acceptable.”

PBS has an item in the book pointing out that the Public Broadcasting Service (a word some journalists and editors still insist on replacing incorrectly with the word “System”) was not technically a TV network but “an association of public television stations organized to buy and distribute programs selected by a vote of the members.” Do they still do it that way?

TNT had an item in the 1977 Stylebook, but only as an explosive -- trinitrotoluene -- not a cable TV network.

Perhaps the most dated elements in the 1977 Stylebook are the items on races, religions and nationalities, plus the many companies and brand names listed in the book that no longer exist.

In 1977, when I bought this Stylebook for my freshman year at journalism school, we were assigned to memorize it. Although memorizing it word for word was impossible, the intensive study undertaken for this task made a first-year journalism student very familiar with its contents.

The most fascinating item for me was the one about the word “Chinaman.” The item said “Chinaman” was “a patronizing term. Confine it to quoted matter.” I had never heard this word before in my entire life, and never in the years since has it ever come up.

The 1977 Stylebook advised against using other ethnic terms too, including “Chicano,” “Asiatic” and “Jewess.” “Honky” was a no-no too, the book counseled. “Use it only in quoted matter,” the book said, such as in stories about “The Jeffersons” (OK, I added this last bit).

Muslims were still “Moslems.” The word “Negress” was not to be used, but incredibly, it was still OK to use “black” and “Negro” interchangeably, said this book published in 1977.

“Lesbian” and “gay” were acceptable in 1977, but never use “gay” as a noun, the book cautioned. “Never abbreviate Christmas Day to Xmas or any other form,” it also said -- a directive seldom followed today.

Throughout the book, you will find the correct spellings of great company names no longer in existence such as “Pan American World Airways,” “F.W. Woolworth Co.” (“Woolworth’s is acceptable in all references,” says the book -- alas), Conrail, American Motors Corp., Atlantic Richfield Co. and many more.

Then as now, it’s “Canada goose,” not “Canadian goose”; there is no apostrophe in “Pikes Peak” and no period in “Dr Pepper” (nor after the second “S” in “S.O.S” soap pads either).

And please don’t refer to that iconic figure of the National Park Service who warns against setting forest fires as “Smokey the Bear.” It’s just “Smokey Bear.” Got that?