Who Is Your Favorite TV Character? 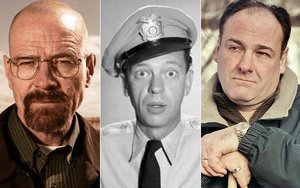 The questions a TV columnist is asked most frequently include: What is your favorite show? Do you like [insert show title]? And sometimes: Who have you met?

One question I don’t recall ever being asked is: Who is your favorite TV character? And yet it is a question I ponder every so often when considering the way television has evolved from my childhood in the 1960s and ’70s to the present day.

Perhaps due to my own personal TV history, my tastes generally run toward the more outlandish characters of older TV shows whenever I try to conjure a list of my favorite characters.

I freely admit without embarrassment that these characters are not chosen for any particular depth of their personalities. On the contrary, you might consider most (if not all) of them as not unlike figures from old cartoons.

For me, this group is typified by these all-time greats: Ed Norton (Art Carney in “The Honeymooners”), Granny (Irene Ryan in “The Beverly Hillbillies”), Barney Fife (Don Knotts in “The Andy Griffith Show”), Gilligan (Bob Denver in “Gilligan’s Island”), Lenny and Squiggy (Michael McKean and David L. Lander in “Laverne & Shirley”), B.A. Baracus (Mr. T in “The A-Team”) and Steve Urkel (Jaleel White in “Family Matters”).

Labeling them as cartoon-like is in no way intended to condemn these characters or the performances that went into them as two-dimensional. Ed Norton, Granny and Barney Fife in particular were played by actors whose skills were inarguable. It is a cliché to write of TV characters that they are indelible, but in these three cases, they really are. They should never be forgotten.

The era in which they appeared was well-populated with these kinds of characters. In the decades that came afterwards, they became fewer and far between. Lenny and Squiggy in the ’70s, B.A. Baracus in the ’80s and Urkel in the ’90s were more the exception than the rule.

What happened? TV became more sophisticated (yes, I know it’s strange to read the word “sophisticated” in the context of a blog about television, but there it is). That doesn’t mean there were not still indelible TV characters to come, but more often than not, they were not likely to be cartoonish anymore.

When did this changeover occur? It is probably fair to say it happened at the outset of the 1970s when “The Mary Tyler Moore Show” and “All in the Family” came along. From then on, a list of one’s personal favorite TV characters takes on a different aspect.

My own list then begins to include Lou Grant (Ed Asner in “Mary Tyler Moore” and “Lou Grant”), Columbo (Peter Falk in “Columbo”), Jim Rockford (James Garner in “The Rockford Files”) and Edith Bunker (Jean Stapleton in “All in the Family”). Her husband, Archie (Carroll O’Connor), was the focal point of “All in the Family” and he made you laugh and he made you angry. But Edith broke your heart.

In the present TV era that most people date to the arrival of “The Sopranos” in 1999, the most memorable TV characters bear almost no resemblance to the ones that preceded them decades ago.

This is the era of anti-heroes, which are characters whose personality traits are loathsome, but you still cannot bring yourself to entirely dislike them. The Big Three of this group are Tony Soprano (James Gandolfini in “The Sopranos”), Vic Mackey (Michael Chiklis in “The Shield”) and Walter White (Bryan Cranston in “Breaking Bad”). They were all murderers and criminals but you found yourself liking them, and even rooting for them.

It’s funny, however, to juxtapose them alongside outlandish, older characters such as Barney Fife or Steve Urkel because they are so different. TV is so serious these days, isn’t it?

The decades-long era of the cartoonish TV character is long gone now. It’s true that TV is more sophisticated these days. But I have to ask: Where’s the fun in that?

tv
4 comments about "Who Is Your Favorite TV Character? ".
Check to receive email when comments are posted.
Read more comments >
Next story loading