'Economist' Reaches Out To NYC Readers Via MTA Campaign 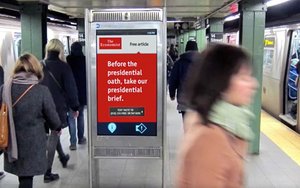 On Tuesday, The Economist launched a digital out of home campaign in New York City’s subway stations as part of its expanded marketing efforts in the US.

The kiosks also display ads, and The Economist’s DOOH campaign will feature post-election content, hoping to catch “globally curious” commuters, according to a statement.

Users can tap the screen and enter their e-mail or phone number to receive a link to a free Economist article. The ads will run for 15 seconds every two minutes, for four weeks.

Mark Cripps, EVP of brand and digital marketing at The Economist, stated the interactive ads will “help us drive subscriptions across the US.”

"As we ramp up our marketing efforts in the U.S., this activity in New York City is an important piece of our digital marketing plans to drive awareness of The Economist brand and increase subscriptions” added Mark Beard, SVP of North America at The Economist.

The creative was developed by Promixity London. Rapport US, an IPG Mediabrands Out of Home (OOH) agency based in New York City, led the media buy.

This DOOH campaign is part of The Economist's expanding advertising program in the American market. In October, the 173-year-old publication based in London unveiled a direct-response television (DRTV) campaign to air around the U.S. presidential election.

Beard told Publishers Daily that this push into the American market comes "at a time when there is so much uncertainty in the world."

“More and more people are searching for a trustworthy source of news that they can turn to, a publication that lays out the facts and allows readers to make up their own minds on the important issues,” he said.

Beard added that The Economist is ramping up its advertising in the UK as well; it launched a DRTV campaign in the region earlier this year. In early 2017, the company plans to unveil a dOOH campaign in the UK too.

“We believe that each and every digital marketing channel serves a unique purpose, whether that be raising awareness, driving consideration, or directly generating subscriptions. Each market is unique and we tailor our marketing activities in each region accordingly,” he said.