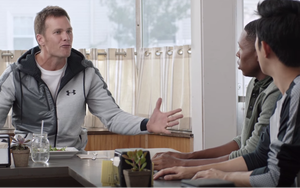 Our long national nightmare is over: New England Patriots quarterback Tom Brady is finally playing the Deflategate debacle for laughs, thanks to a new campaign from Foot Locker.

Brady, who routinely pops up in ads for products ranging from Under Armour to Uggs to UnReal candy, plays himself in a diner, losing his cool when he overhears two Foot Locker customers wondering “what Foot Locker is up to” with its ability to makes its sale better, year after year.

“That’s an unfortunate mindset,” Brady says, before stomping off in a hissy fit. “Why can’t some things just be great? It starts with questions. Questions turn into assumptions. And then assumptions turn into … vacations.”

Brady endured a four-game suspension as the result of the NFL’s controversial decision on Deflategate.

“‘Week of Greatness’ is our time to have fun with relevant sports moments,” a spokesperson for Foot Locker tells Marketing Daily, and Brady was game. “We've had success making light of serious stories. We asked, showed him the script, and, fortunately, he was into it.”

In another spot, NBA forward Carmelo Anthony faces a pair of Foot Locker shoppers who probably spend most of their lives commenting on sports articles online.

The spokesperson says ads are running on ESPN, including SportsCenter and NBA games, NBA TV and WWE. The Brady spot is scheduled to air locally during Sunday's Patriots game, while Anthony’s spot is set to during upcoming Knicks games.

The company has also created a series of limited-edition commemorative pins with Pintrell, which it will offer as gifts with purchase.

In its most recent quarterly results, Foot Locker’s sales rose 5.4%, excluding currency fluctuations, to $1.78 billion, compared with $1.69 million from the year-earlier period. Same-store results up 4.7%. The New York-based retailer is schedule to release its third-quarter numbers later this week.