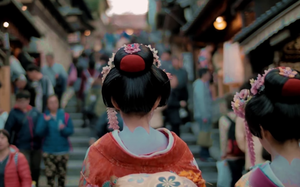 As Japan's largest airline, All Nippon Airways (aka ANA)  is well known in Asia. But in North America, not so much.

The company this winter is launching its first U.S.-focused campaign suggesting that flying on ANA is an experience unparalleled by any other air carrier, using the tagline “Welcome to Experience Class.”

“We’re seeking to redefine the idea of class,” Tadashi Matsushita, ANA’s head of communications for North America, tells Marketing Daily. “‘Experience Class’ embodies our belief that the journey is as important as the destination. This is our commitment to that.”

ANA this week will launch a digital video with musician Steve Aoki. The video features a pulsing soundtrack from Aoki (titled “Get Me Out Of Here”) along with shots of inside and outside one of ANA’s aircraft and on-board features. On-screen text encourages people to “Savor the flavor,” “Make the connections,” and “Enhance your journey.” The video continues with shots of vistas, statues and experiences that can be had while visiting Japan and Asia.

“It pays homage to the golden years of travel when it was something special, especially air travel,” Matsushita says. “[Steve Aoki] offers an amazing experience at every show, and we aim to deliver that same experience on every flight.”

ANA's partnership with Aoki will continue beyond the video, with the musician creating customized Spotify playlists for travelers. The airline will also work with other notable fashion and cultural influencers, in the hopes of attracting the attention of Millennial and Generation X travelers, Matsushita says.

The campaign will launch first on a specially created ANA microsite. It will be followed by paid and social media, Matsushita says.