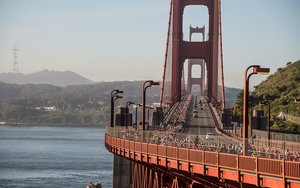 United is the latest major brand to sign on as a sponsor of the Rock ’n’ Roll Marathon Series.

United MileagePlus customers will have access to exclusive pre- and post-race events, such as an invite-only dinner the night before, as well as discounts on entry fees for each race.

Many of the airline’s customers and employees are based in San Francisco and Washington, D.C., and “we want to extend our commitment there,” says Mark Krolick, United’s vice president of marketing.

Each Rock 'n' Roll event is known for having live entertainment along the course, lining the route with bands and local cheer squads and topping off the experience with a finish line celebration and concert.

Alaska Airlines has been the title sponsor of the Seattle event and will continue to be, says Josh Furlow, president of Competitor Group, which operates the series. Other series-wide sponsors include Toyota, Geico, Humana, Transamerica, Gatorade and Brooks Running Co. (footwear and apparel).

“Our Rock 'n’ Roll Marathon Series audience is the most diverse and inclusive in the industry, appealing to educated family decision makers,” Furlow tells Marketing Daily.

“It’s a young audience, too, as 41% of our runners are Millennials under the age of 35,” Furlow says.

The United Airlines Rock 'n’ Roll Washington, D.C., Marathon features one of the most iconic start lines in running at 14th Street and Constitution Avenue adjacent to the National Mall. The route takes runners on a tour of America’s historical monuments and D.C.’s eclectic neighborhoods including Adams Morgan and Capitol Hill. It is the only marathon run entirely in the District of Columbia, featuring live bands along the course and culminating with a Finish Line Festival at RFK Stadium.

The United Airlines Rock 'n' Roll Half Marathon San Francisco takes participants from Ocean Beach along the Great Highway with ocean views, through the Presidio, across the Golden Gate Bridge and along the Crissy Field shoreline with skyline views before ending in the heart of the city, in front of City Hall.