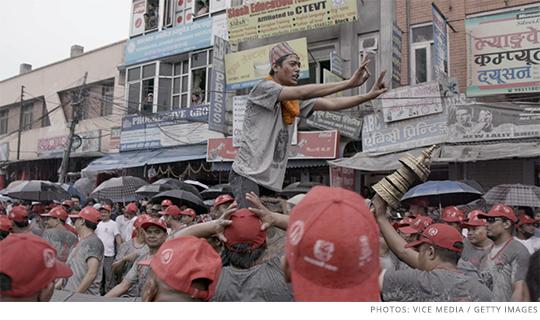 A selection of Vice’s archival footage is now available in the Vice Media Collection on Getty Images, a growing video library that also includes clips from Vice’s verticals like Motherboard, its tech site, and Broadly, its women’s interest channel.

“It’s a great opportunity [for Vice] to grow both brand and reach with our customers,” Peter Orlowsky, VP of business development at Getty Images, told Publishers Daily.

The monetization of the branded collection is a revenue-share model. Though he declined to give numbers, he did say the split is “mutually beneficial.”

In addition to its more than 200,000 contributors and hundreds of image partners, Getty Images has partnerships with BBC for video content and ITN for news distribution.

Orlowsky says the content deal with Vice is key, given the “real world, authentic visual material” it provides, from places in the world that few can access. For example, the gallery contains video clips from Broadly’s documentary short on the living Kumari goddesses of Nepal.

“Now with Vice, we feel like we have a full-depth collection,” he says.

Vice’s clips will also allow Getty customers to connect “with youth and the millennial market.” “[Vice's] different point of view was one we felt our customers were clamoring for,” he adds.

A Getty Images spokesperson said the company’s content teams monitor data to track trends. They recently found the search term “authentic moment” has gone up over 1000% on the Getty Images site in the last year. Search terms such as woman, man, father and child are now prefaced by the word “real.”

The clips in the collection are chosen by the Getty Images team, which give “guidance on material for our market.”

For example, Getty Images will request a certain aerial shot or footage from markets in Southeast Asia that customers are requesting, Orlowsky said. In the future, Getty Images may request content from Vice’s other verticals, such as Noisey or Munchies. When it comes down to it, it is less about which vertical the content comes from and more about “syndicating the material that the customer needs,” he says.

Going forward, Orlowsky said his team will continue to reach out to other video publishers to add more content to Getty Images.