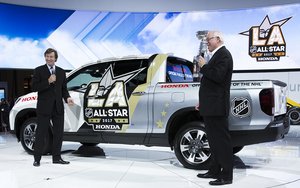 The vehicle unveiled by Jeff Conrad, Honda's senior vice president and general manager, was a custom-wrapped 2017 Honda NHL All-Star Ridgeline which includes the All-Star Game logo. Attendees during the public days of the auto show Nov. 18 - 27 will be able to take a photo with the “MVP Ridgeline” at the Honda booth.

Honda and the National Hockey League announced that the automaker will serve as the title sponsor of the 2017 NHL All-Star Game in Los Angeles for a third straight year. The automaker will present a 2017 Ridgeline truck to the most valuable player of the game on Jan. 29 at the Staples Center.

Honda’s presence during the 2017 NHL All-Star festivities in Los Angeles also will include serving as a sponsor of one of the skills in the 2017 NHL All-Star Skills Competition Jan. 28, where the greatest players in the League will face off in a series of on-ice contests. NHL All-Stars will show off their best moves in the Honda NHL Breakaway Challenge with the winner determined by fan vote.

Gretzky, the NHL’s all-time leader in goals (894), assists (1,963) and points (2,857) as well as numerous other records, currently serves as the official Centennial Ambassador of the NHL’s year-long celebration of its Centennial in 2017. He will make appearances at various events throughout the calendar year as the league marks 100 years of the NHL, including the 2017 NHL All-Star festivities in Los Angeles.

Honda is celebrating nine years as the Official Vehicle of the National Hockey League and will support the NHL throughout the 2016-17 season as the exclusive automotive partnership of the NHL. Honda vehicles, including the Ridgeline, Pilot SUV and CR-V crossover will be featured at key events including NHL Centennial Classic, NHL Winter Classic, NHL All-Star Weekend, NHL Heritage Classic, NHL Stadium Series, NHL Awards, and NHL Draft, as well as throughout the Stanley Cup Playoffs and Stanley Cup Final.