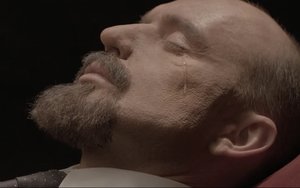 Vladimir Putin may be celebrating these days … but Vladimir Lenin’s corpse is crying, thanks to a vodka made in Detroit.

The latter is the premise of the first TV spot (below) from craft spirits maker Valentine Distillery, based in Detroit suburb Ferndale, Michigan.

The 30-second commercial imagines that the preserved body of the Soviet Union’s founding father shed a tear when he learned that Valentine Vodka had been chosen as “the World’s Best Vodka” during TheDrinksReport.com’s The World’s Best Spirits awards in London earlier this year.

Founded in 2007 by Rifino Valentine, the distillery makes small-batch, handcrafted vodka, gin and bourbon, as well as vodka. The products are sold in the U.S. and six other countries.

The vodka spot is airing in the Michigan market on networks including Spike, AMC, TBS and USA Network.

In addition to YouTube, it is also featured on the distillery’s site and Facebook page. It’s being supported with paid Facebook advertising in the local market.

“Lenin” is played by Jeremy Verdusco — a local who just happened to bike down Stewart’s street when the team was in search of someone resembling the dead (but still on public view) revolutionary. He was “an innocent pedestrian in the wrong place at the wrong time,” says Stewart. “The shoot required him to spend 10 hours in facial prosthetics and makeup.”