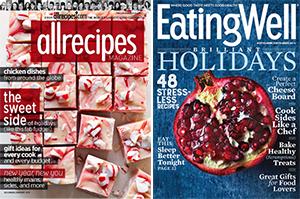 Meredith Corp.’s EatingWell and Allrecipes magazines are printing their largest issues ever this winter, due to an increase in total ad pages in the editions.

Compared to the same issue last year, EatingWell’s November/December 2016 issue, which hit newsstands October 25, had its number of ad pages increase by 58%.

Total ad pages for EatingWell were up more than 40% this year, compared to 2015.

The Allrecipes December/January 2017 issue, which hits newsstands on November 29, had a total advertising increase of 22%, compared to last year.

Overall, total advertising pages in Allrecipes grew by 13% in 2016.

The Meredith spokesperson attributed the brand’s attractiveness to advertisers to its “growing appeal to the food-obsessed millennial audience.” Some 37% of Allrecipes’ audience are consumers born between 1977-1994.