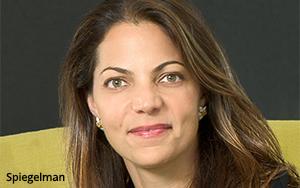 Rachel Spiegelman will become CEO of Pitch effective January 1 succeeding agency founder Jon Banks.  As CEO, she will oversee the 70-person shop with offices in Culver City, CA and New York City and will continue to serve as president until the agency can find someone to assume her role.

Spiegelman has ambitious plans. “I want Pitch to continue to be the agency clients tap to solve real business problems,” she said. “We’re going to keep moving to reach our goal of doubling revenue by 2020 while maintaining the culture and entrepreneurial spirit of Pitch.”

She has been with the agency since it launched in 2008, first starting as an account lead before being promoted to president in April of 2013. Her contributions have been critical to building the agency's culture and client roster, which includes Burger King, Pepsi, Quicken Loans, Netflix’s “Orange is the New Black,” Public Storage, and the Waldorf Astoria.

The incoming CEO has worked “tirelessly since we opened Pitch eight years ago and she’s the absolute best person to lead our next chapter," says Banks. "Clients love her and she’s an amazing marketer with strategic and creative chops able to get the best out of everyone. That’s an ideal skill set for a CEO.”

Banks will become the shop’s chairman, maintaining high-level client relationships and continuing in an advisory role.

Pitch was acquired by Project Worldwide, an employee-owned, independent agency network, in 2014. Project chairman and CEO Robert G. Vallee, Jr., said he’s thrilled to have another senior female leader rise to the top of one of the network’s 14 agencies.

“We’re committed to having the best-and-brightest talent at all levels of our companies,” said Vallee. “Rachel has embodied the best of agency leadership and is sure to continue to deliver powerful programs for Pitch’s clients.”