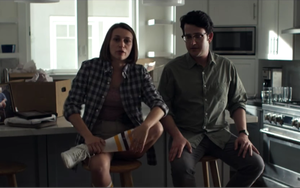 Progressive Insurance is launching a campaign that takes a humorous look at the phenomenon everyone is familiar with — turning into one’s parents.

The effort does not feature Flo, the company's fictional salesperson character who has been featured in most campaigns since 2008.

“Some stories are better told in a different way,” says Cat Kolodij, business leader, marketing strategy and innovation for Progressive Insurance. “This idea was compelling on its own, so we chose to not use Flo. However, we’ll continue to use Flo moving forward.”

Dubbed “Young Homeowners,” the campaign features a series of ads, directed by Roman Coppola, that seek to reassure young homeowners with a humorous look at what it’s like to “become our parents” in a process the company calls Parentamorphosis.  The first two spots features a man becoming his mom, and a woman becoming her dad.

“We realize there are times in life when life changes significantly,” Kolodij tells Marketing Daily. “Some changes you can anticipate and some you can’t anticipate. We want to help people see we are here to help during all life changes.”

The campaign is integrated across mass and digital channels. The spots will begin running Thanksgiving weekend, airing during the parade and Fox College Football. After that, it will run through December, and then again in the spring across a mix of network and cable channels. The campaign will also engage people across Facebook, Instagram, Twitter, digital placements and through influencer relationships.

“For this reason, many of our social marketing redirects to our content hub where we’ve collected both fun and educational elements we think young homeowners will find entertaining or useful,” she says. “If people only see our TV spots, they usually go to Progressive.com so we have a marketing tile on our home page that will drive people to Life Lanes.”