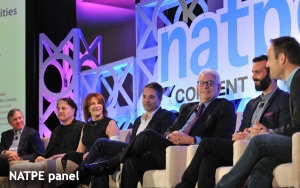 Imagine a world where all of television is commercial-free. According to one panelist at a session during the January NATPE conference in Miami Beach, that reality is already here for an entire generation of younger viewers.

Greenberg was part of a panel titled “Scripted State of the Union: Will Creative Excellence Survive Tough Business Realities?” NATPE is the National Association of Television Program Executives. Its annual conference -- formerly a marketplace for national syndicators to pitch their shows to broadcasters -- now attracts attendees from across the entire “content” spectrum.

This column was previously published in TV Blog on January 26, 2016.

advertising, tv
1 comment about "TV Without Commercials? That Reality Is Already Here".
Check to receive email when comments are posted.
Next story loading