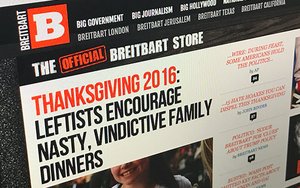 AppNexus on Tuesday said it would ban Breitbart News, the ultra-conservative news outlet that was led by Steve Bannon, who’s now President-elect Trump's chief strategist, from its ad network because the site promotes hate speech. Breitbart has been criticized for promoting ultra-right-wing, bordering on racist, views.

AppNexus appears to be the first ad-tech firm to announce such a ban.

"AppNexus maintains policies governing the quality of inventory and advertising available in our marketplace. We do not serve ads on sites that promote piracy, pornography, graphic violence, or hate speech, or on sites that are ad farms or that attract a unusual amounts of non-human traffic," Josh Zeitz, the company's VP, corporate communications, told Real-Time Daily in an email.

"Our decision to turn off Breitbart was in keeping with ordinary policy enforcement. Though Breitbart is not a direct client of AppNexus, some of its ad-tech vendors hook into our marketplace. Until Breitbart is in compliance with our hate speech rules, those vendors cannot make its inventory available on our platform," Zeitz said.

In an email statement to Reuters, Breitbart Chief Executive Officer Larry Solov said the company "always and continues to condemn racism and bigotry in any form."

The ban comes as the alt-right movement, which includes neo-Nazis, white supremacists, and anti-Semites exercise their right to free speech after Trump’s win.

Trump's appointment of Bannon was denounced by civil rights organizations and minority groups including the Southern Poverty Law Center, the Anti-Defamation League, and the Council on American Islamic Relations.

Zeitz told Reuters that the AppNexus move was “apolitical and the domain can be reactivated once the content in question is addressed.”

"We have no interest in turning off sites because of ideology. That's not what this is about. This is about specific content that violates the hate speech code," Reuters reported Zeitz said.

The ban was first reported by Bloomberg News.