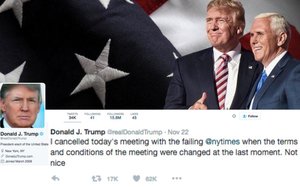 It wasn’t the first time Donald Trump referred to it as the “failing New York Times,” but there is something about him doing it now, as President Elect, that seems, well, un-Presidential. And if you ask me, a little reckless.

Now that he is the most powerful man in the world, Trump is making it clear he will use the power of his office to neutralize any opposition, including unflattering scrutiny by the news media.

He is starting with one of the most credible sources of journalism that could actually threaten his authority.

The worst part of the statement isn’t that Trump used it to make a public display of his power over the media by canceling an on-the-record briefing with the paper, before eventually agreeing to it again.

Or that it followed meetings in which he thumbed his nose at the nation’s TV news networks.

The worst thing about his dismissive tweet of the “failing New York Times,” is that it is true.

It isn’t failing in its journalistic mission. It is failing because the economic model that used to support its kind of journalism is failing.

And that is also the reason it is reckless for the President Elect to marginalize the “failing New York Times” the way he marginalized political opponents with his brilliant use of neurolinguistics, his social-media skills and his constant, incessant repetition, whether it is “crooked Hillary, crazy Bernie, low-energy Jeb, or the failing New York Times.”

In the weeks since the election, I’ve consoled friends, family, and anyone who would listen that the great thing about American democracy is that as powerful as the presidency is, we still have checks and balances to keep it in check.

At a time when Trump would seem to have control over two of the three branches of government, and is likely 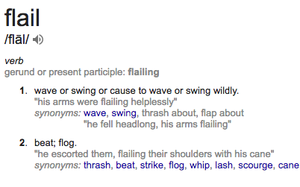 to have a fundamental influence over the third, it is more important than ever that Americans have unfettered access to information about the way the country is being governed.

You know, the un-fake news kind of actual journalism.

The kind that keeps us informed so we can make better decisions about exercising the checks and balances we have as citizens: the right to protest, to assemble, to express ourselves, and especially to vote.

Yes, Trump ultimately conceded to an on-the-record interview, which is published in today’s Times, but not before he snubbed the paper, bitch-slapped the TV news networks and demonstrated how he can bypass the mainstream media altogether by going straight to the American public via YouTube.

In one of his first acts as President Elect, Trump is saying America’s free press won’t be completely free. That only the media that delivers his message in the way he wants it delivered will have free and open access to him. We already know what kind of media that will be: the kind he controls directly.

I’ve written how Donald Trump is the political equivalent of a New Establishment brand. Now he wants to disintermediate one of the few things that can check his power. Why is this a story for MediaPost?

Because it is a story about the changing economics of media, and the impact it has on every facet of the communications marketplace, including the electorate.

Last month, MediaPost collaborated with Bob Garfield and Wharton on our second annual Media Future Summit. The event was off-the-record, so I cannot tell you explicitly what anyone said, but I can tell you that every conceivable economic model for sustaining and strengthening the role of the news media was explored: everything from altruistic models like donations and philanthropy to micropayment systems, commerce and native advertising.

I can also tell you there were no clear answers, but a lot of concern that the economic models that have supported journalism for the first couple of centuries of America’s democratic experiment may no longer be sustainable. Those, of course, have been advertising, subscriptions and newsstand sales.

What’s a newsstand, you ask? Scratch that one. 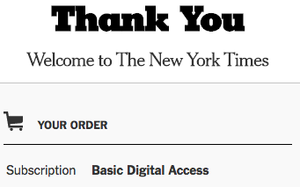 terms of subscriptions, I must confess that I, too, am among the post-Internet masses that have considered the Free Press a little too free.

I have justified that because good journalism like TheNew York Times’ is expensive, and the only journalists who may be more economically challenged are trade ones like me.

But after years of being a lapsed subscriber, I just renewed my subscription to TheNew York Times. Not because the paper needs me, but because I need the paper. If you ask me, we all do.

So if you’re one of those who have been sitting on the sidelines, I would encourage you to pony up and subscribe, if not to the Times then the newspaper of your choice, perhaps your local one.