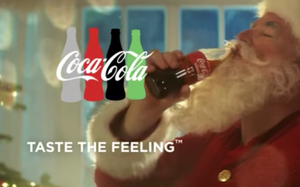 The 30-second ad (below) features a teenage boy showing his appreciation by using a cart to deliver cold bottles of Coca-Cola, Diet Coke and Coca-Cola Life to neighbors hanging Christmas lights, preparing a holiday meal, and helping retail shoppers. The last bottle of Coke is reserved for Santa.

The ad, “A Coke for Christmas,” developed with SRA Rushmore-Madrid, is the focal point of a global campaign. The multi-brand creative is a holiday continuation of Coca-Cola’s “One Brand” strategy, and its “Taste the Feeling” umbrella campaign.

A social media component will employ influencers to encourage teens to post about the ways that they “step up” during the holidays, using the hashtag "#WeSleigh."

The Coca-Cola Holiday Caravan — a fleet of trucks illuminated with red-and-white lights now in its 19th year — will visit more than 25 U.S. cities through December 18.

The iconic Santa images originally created for Coca-Cola in 1931 by Haddon Sundblom, and the brand’s polar bear characters, now 23 years old, will appear during the holidays on various bottles, cans and other packaging for Coca-Cola, Coke Zero, Diet Coke and Coca-Cola Life.