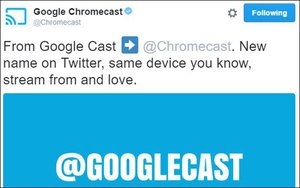 Google seems to be going through a bit of an identity crisis for its Google Cast product, which allows users to send content from a smartphone, tablet or computer to TVs or speakers.

Its Web site indexed in google.com still reads "Google Cast," but the Twitter account for Google Cast describes the device as Chromecast, a new name on Twitter for the "same device you know, stream from and love."

The Web site refers to the product as Google Cast, also known as Chromecast built-in.

The variations in name depending on where a consumer reads it has become confusing to some. @NinjaCyborg on Twitter tweeted to @Chromecast "Wait, didn't you just STOP using the name Chromecast in favour of Google Cast? Can you make up your minds please?"

And @_vinr wrote "@Chromecast holy crap! How many times do we have to go through a name change? You guys seriously have some branding issues."

Apparently, Google has been going back and forth for months, changing the name of the product from Chromecast to Google Cast and Google Home, as noted by the Android Police.