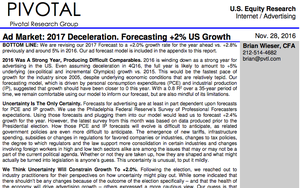 In what likely is a precursor for the rest of Madison Avenue’s annual year-end forecasts, influential Wall Street analyst Brian Wieser has downgraded his outlook for 2017, citing tough comparisons with better-than-expected ad expansion in 2016.

“We are revising our 2017 forecast to a +2.0% growth rate for the year ahead,” Pivotal Research Group’s Wieser writes in a note sent to investors early this morning. That’s a downward revision of nearly a third of his original forecast of a 2.8% rate of ad industry expansion in 2017.

The main reasons cited by Wieser are a number of uncertain variables heading into 2017, as well as difficult comparisons with 2016, which Wieser now estimates grew 5%, marking the ad industry’s best growth since 2005.

This year’s expansion came despite weak underlying economic conditions, Wieser noted, adding that Pivotal’s forecasting model projected that based on “personal consumption” and “industrial production” estimates, 2016 ad industry growth “should have been closer to 0.”

Looking ahead, Wieser characterizes the ad industry’s near-term outlook as “uncertainty is the only certainty,” citing a variety of global economic indicators, as well as the outcome of the U.S. presidential election.

“Following the election, we reached out to industry practitioners for their perspectives on how uncertainty might play out,” Wieser explains, adding, “While some indicated that there shouldn’t be any changes because of the outcome of the election specifically – and that the health of the economy will drive advertising growth – others expressed a more cautious view.”

Given that uncertainty, Wieser projected 2017 will begin at a slower pace and will build toward the end of the year, with an overall gain of 2.0% expected. The first quarter will experience especially difficult comparisons, as 2017’s will post off of 2016’s 6.9% rate of first quarter growth.

Most of Madison Avenue’s leading forecasters are expected to release their year-end forecasts and outlooks for 2017 Dec. 5 during the opening session of UBS’ annual media outlook conference in New York City.
Next story loading