Trump To News Media: You're No Fun At All! 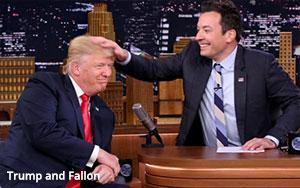 When I first heard about that “summit” meeting that ruler-elect Donald Trump “requested” last week with the various TV news honchos and some of their news stars, my first reaction was: Why didn't these people tell The Donald to go jump in the nearest lake? Journalists are not obligated to obey commands from a United States president, much less a president-elect.

From the coverage, it seemed as if Trump had commanded them to appear. I suppose they felt they couldn’t blow him off, even if it was close to Thanksgiving and some of them may have had planes to catch if they were going to get to grandma’s house in time for dinner on Thursday.

Plus, maybe they felt that rejecting his “invitation” to appear before him in the majestic surroundings of his Trump Tower penthouse (or possibly in his company’s conference room on a much lower floor) might have created a rift with the Trump team, who would then retaliate by limiting the offending news organizations’ access to the great Ratings Magnet-in-Chief.

The news networks lived well and prospered off of Trump's wild presidential campaign, and they are expecting a Trump administration to deliver more of the same. Still, their slavish attendance at this command performance felt uncomfortably like kowtowing.

In an ideal world, an organization of journalists would balk at such a command by a president or president-elect -- access or no access. After all, not having access to the president would not necessarily prevent a well-connected journalist with sources inside the administration from doing his or her job.

But it is easier to do that job -- and better for maintaining the profile of the news organization a journalist represents -- if a journalist maintains a good relationship with a presidential administration.

So the news honchos and some of their air talent somehow made their way through the New York City Police Department and U.S. Secret Service's security blockade on Fifth Avenue to pay a visit to the great man last Monday.

Among those seen in the news footage milling around in the marble-and-onyx Trump Tower lobby in front of the polished brass elevator doors waiting to go up were CNN President Jeff Zucker with Wolf Blitzer in tow, MSNBC President Phil Griffin and Charlie Rose with his usual sleepy-headed expression on his face.

I am sure they were curious about what was about to happen -- which was probably another reason why they accepted this Trumpian request for an audience. So great was their curiosity that going ahead with this meeting was really the only way to satisfy it. They were probably asking themselves: What now?

In the aftermath of the meeting, the coverage ranged from the “firing squad” characterization of the New York Post to constructive, at least in part -- which was the spin CNN put on the story.

While acknowledging that Trump “showed disdain” for them, “vented” at them and “was highly critical of CNN and other news organizations,” Trump was also -- according to the same story -- conciliatory (supposedly).

“He also answered questions, listened to the journalists’ arguments about the importance of access, and committed to making improvements,” the story said.

Of course, this story was CNN's own story about a news event in which CNN was a central participant, and also had a vested interest. Heaven forbid CNN's own story of this meeting with Trump take a harder tack, lest they antagonize this great and powerful Oz even more.

That's the problem with this kind of a meeting. I mean, what were the news organizations there to bargain for? Their journalistic freedom? That's already guaranteed, isn't it?

The real problem with Trump and the news media might be that they are so different from the other media in which he has been a central figure for so long -- entertainment media, including gossip columns, tabloid front pages, reality-TV, book publishing and whatever else he's been involved in.

He is used to good publicity, not negative stories. When he goes on TV, he wants it all to be like joking around with Jimmy Fallon, not taking questions about complicated stuff from journalists.

So what was the upshot of last week's meeting? That the news organizations would take it easy on him? At least try to have a few laughs with him on “Meet the Press”? Did they get Trump to agree to take a few of them along the next time he dines at 21?

The whole atmosphere of that meeting seemed wrong somehow. Journalists should not have to bargain with presidential administrations over how to cover a president. Last week's meeting just feeds the impression that Trump can really be a big baby sometimes.

Whatever happened to the journalists’ credo about comforting the afflicted and afflicting the comfortable? It is not the responsibility of the nation's news organizations to make Baby Donald feel better.

journalism, news, politics, tv
4 comments about "Trump To News Media: You're No Fun At All!".
Check to receive email when comments are posted.
Read more comments >
Next story loading