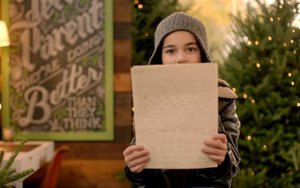 Minute Maid is using video, social media and fill-in-the-blanks, shareable letter templates to encourage offspring of all ages to send their parents messages of love and gratitude this holiday season.

The campaign is an extension of an ongoing “Doin’ Good” (#doingood) campaign, which seeks to underline that Minute Maid is a “family brand” by conveying warm, reassuring messages from kids to stressed-out, self-doubting parents. The campaign was launched in spring 2015.

The new creative includes a 3-minutes-plus video (below) showing five sons and daughters of various ages handwriting heartfelt letters to their folks, and basking in their reactions as their parents read the letters. To film the vignettes, Minute Maid and agency Doner set up a “Nothing to Sell Store” devoted to attracting shoppers in to write the letters, which were then gift-wrapped for delivery.

The video is being used to drive viewers to an area of the Minute Maid site where users can create a letter using one of three fill-in-the-blanks templates, and share it via Facebook or Twitter.

The video has drawn more than 120,000 views on YouTube since being posted there on November 22. It is also being featured on the Coca-Cola brand’s social media sites.

The note-writing campaign and site also are being promoted through a personal post on the Minute Maid blog by “Mama Knows It All” blogger Brandi Jeter Riley.