WWE WrestleMania Is Not Itself Without Snickers 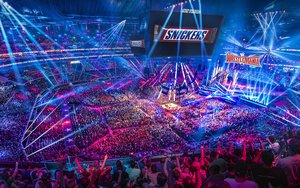 For the second consecutive year, Snickers has satisfied its hunger by signing a deal to become the exclusive presenting partner for WrestleMania, which is scheduled to take place on April 2 in the Orlando Citrus Bowl.

The Mars Inc. brand, a long-time WWE partner, was the exclusive presenting partner for WrestleMania 32 this past April, receiving some 1.5 billion media impressions from the effort.

“When it comes to displaying the 'hunger symptoms' that Snickers satisfies, nobody embodies them better than WWE Superstars,” said Allison Miazga-Bedrick, director for Snickers Brand. “We’re back for a second consecutive year as the presenting sponsor of WrestleMania 33 to once again share our 'You’re Not You When You’re Hungry' message to an extremely engaged WWE fan base in unique ways.”

Snickers will up the ante on marketing support from WrestleMania 32, when several WWE personalities were featured in the brand’s trademark “You’re Not You” campaign, which included Paige, Roman Reigns, Michael Cole (WWE Announcer) and Ric Flair.

According to Snickers, a new “You’re Not You When You’re Hungry’ effort will be anchored by TV to encompass WWE Network, which has more than 1.8 million subscribers worldwide; and such WWE flagship TV programs as “Monday Night Raw” and “SmackDown Live” on USA Network.

As part of its Internet, social media and retail efforts, Snickers said it would activate a “complete brand takeover” of WWE’s YouTube channel the day of WrestleMania 33 and “custom digital and social content, including a Snapchat live story.”

As part of the WWE’s new strategy to bundle its jewel events, Snickers will have a presence at WWE live events the week prior to WrestleMania 33. They are scheduled to include WrestleMania Axxess, WWE’s four-day, interactive fan festival in the Orange County Convention Center; and the 2017 WWE Hall of Fame Induction Ceremony, NXT TakeOver, “Monday Night Raw” and “SmackDown Live,” all scheduled for Orlando’s Amway Center.

WWE and Snickers will also join in “more than a dozen activities designed to give back to the host community,” including Be a Star anti-bullying rallies, hospital visits and Make-A-Wish events.

WWE and its marketing partners saw tremendous response to WrestleMania 32.

The event generated a WWE record $170.4 million in economic impact from spending by visitors to the Dallas/Arlington region.

In addition, the crowd of 101,763 fans in AT&T Stadium (home to the NFL’s Dallas Cowboys) made it the best-attended event in WWE history.

Orlando Citrus Bowl seats about 70,000, so WWE will fall short of setting an attendance record.

Nonetheless, both WWE and Snickers are hungry for WrestleMania 33, which is expected to see the participation of such icons as Brock Lesnar, Goldberg, Roman Reigns, John Cena and The Rock; and possibly UFC champion Conor McGregor.