Crayola Crayons Morph Into Characters For The Holidays 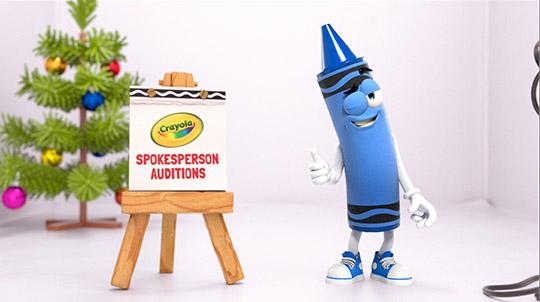 Crayola is launching a holiday campaign that introduces distinct characters for the first time since the brand's inception.

Developed with creative agency mcgarrybowen and animation shop Aardman Nathan Love, Crayola's has transformed four classic colors — Denim, Scarlet, Asparagus and Goldenrod — into unique personalities that are meant to be relatable and memorable to both parents and children.

The characters — animated and conceived by team that created "Wallace & Gromit" and "Shaun the Sheep" — were each selected for their strong roots in Crayola's color heritage.

They debut in a TV spot rolling out in November and December to coincide with the holiday gift-giving season.

There is also digital and social media support of the Crayola character debut running this holiday continuing into 2017. This is a long-term play for Crayola, so consumers can expect to build on-going relationships with these and future characters in coming years, says the agency.

In recent years, Crayola has expanded its portfolio to include creative toy products and has partnered with mcgarrybowen on experimenting with new creative strategies including tapping into social media influencers like Zach King to partner and promote toy products, like the Easy Animation Studio.

This year, while continuing to promote specific products and product lines, as well as expanding its digital and social presence, Crayola is launching this character campaign to remind consumers that Crayola has "colorful gifts" for kids of all ages at the holidays.