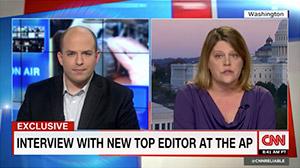 In an interview over the weekend, Sally Buzbee said one of her top priorities when she becomes the executive editor at the AP is how the news wire service handles its coverage of President-Elect Donald Trump.

"The new administration in the U.S. does actually provide a pretty good opportunity for the AP to do strong accountability journalism, but also to be very fair and even-handed and objective toward the new president," Sally Buzbee told Brian Stelter during an appearance on CNN’s "Reliable Sources" on Sunday.

"That's going to be a very high priority. To do a good job."

Buzbee, previously the AP Washington bureau chief, will take over as executive editor from Kathleen Carroll in January. Carroll announced in July that she would step down at the end of the year after 14 years as AP’s top editor, to spend more time with her family.

In the CNN interview, Buzbee also said the AP is "completely interested in sitting down with the President-elect… in all formats,” including video and text.

“We definitely have concerns about access, but we are taking a one step at a time approach,” she said.

A challenge for many news organizations in the future, she added, is to alter their elitist tone to appeal to a wider audience. A few weeks ago, Buzbee told The Washington Post that one of her goals is to “help newspapers survive in the future.”

She cited "the pressures on the newspaper industry in the United States as an "incredibly important” for the wire service.

AP will also focus on meeting a demand from its members, a result of the immediacy of online news access: a faster news cycle.

“As soon as we get news, we pop it out short and fast; it works for our digital customers,” she said.