Syfy Series Predicts: In Future, Corporations Will Control The Planet 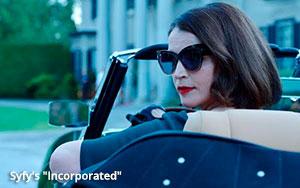 The future is grim in the Syfy series called “Incorporated.”

This new drama series, premiering Wednesday night (November 30), is straight out of the “it’s only going to get worse” school of futuristic science fiction. It is very entertaining.

Think we have problems now? Multiply them about 10 times (or maybe more) and you get the future envisioned in this series.

Among other things, the warnings we hear everyday about environmental cataclysms spurred by climate change have come true in “Incorporated,” which takes place in the ’70s -- the 2070s, that is.

By that time, says the show, the East and West Coast power centers – California and New York (and possibly Washington, D.C.) -- have been submerged by rising oceans and rendered uninhabitable.

In “Incorporated,” the megalopolis that is now the center of economic and corporate power is well inland -- Milwaukee. In this show, multinational corporations are more powerful than governments.

In fact, in the future world of “Incorporated,” corporations largely control the entire globe. While they thrive, most of the world’s governments have gone bankrupt and collapsed.

“The year is 2074,” says some introductory copy show on-screen at the outset of the first episode of “Incorporated.” “Climate change has ravaged the planet, causing widespread famine and bankrupting governments. In their place, multinational corporations have risen in power and now control 90% of the globe. These corporations fight a covert war for market share and dwindling natural resources …” My goodness!

Things are so bad in the United States that one newscast overheard on the show reports that immigrants from the  U.S. are flooding into Canada, in spite of the fact that Canada has apparently constructed a border wall as a bulwark against illegal immigration. Sound familiar? Well, it is probably supposed to sound that way.

The worldwide economy has helped the planet to devolve into a have vs. have-not world. Those with white-collar jobs in the corporate power structure live and work within gleaming, modern “green” zones that are patrolled by heavily armed corporate security forces. The have-nots all live outside the Green Zones -- in vast lawless slums known as Red Zones.

It’s risky to venture out into the red zones, but that also happens to be where all the fun is -- recreational drugs, nightclubs featuring ultimate fighting matches in cages, prostitutes, that kind of thing.

The main storyline in “Incorporated” involves the devious mid-level executives in one of the multinationals, whose president and CEO is a powerful woman played by Julia Ormond. Dennis Haysbert is the only other “name” cast member in the show. He plays a sinister corporate torturer.

The corporate headquarters are heavily guarded and each employee thoroughly vetted. However, spies and evildoers manage to infiltrate it anyway. And that’s where the show’s story springs from.

The best feature of “Incorporated,” and the thing that makes it work, is the attention paid to details. While it’s OK to quibble here and there with some of the characteristics of the future world that this show’s designers envision, the milieu feels correct.

We who live now in 2016 can recognize much of the world of 2074 depicted in this show. And yet at the same time, everything is completely different.

I had a chance to watch just one episode of “Incorporated,” but will definitely watch more. The show is a winner for Syfy, which isn’t all that surprising since this channel’s track record in the development of original content is one of TV’s most notable success stories.