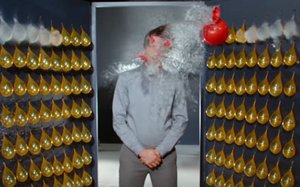 Morton Salt is kicking off the first “masterbrand” campaign in its 168-year history with a bang, quite literally.

The brand and agency Ogilvy & Mather collaborated with hot indie rock band OK Go — known as much for its extremely innovative, award-winning videos as for its music — to create the band’s latest tour de force video.

The connection is the premise of Morton Salt’s new marketing platform, “Walk Her Walk,” which was inspired by the “endurance and unstoppable spirit” of its iconic brand symbol, the little girl who is perennially walking through the rain with her umbrella. Morton is seeking to embody that spirit by making “a real, tangible difference in people’s lives in more ways than ever before,” and inspiring others to do the same, said the brand’s CEO, Christian Herrmann, in the platform’s launch announcement.

The four-minute OK Go official video is for a song called “The One Moment,” from its new album “Hungry Ghosts.” The band, which has Chicago roots, agreed to collaborate with Chicago-based Morton Salt to “reintroduce” the brand in an unexpected way, in part because the new Morton platform ties into the song’s theme.

“The song ‘The One Moment’ is about those moments in life when you are most alive, the moments that truly matter, the moments when everything changes,” said the band’s lead singer, Damian Kulash, who directed this video, and has also directed or co-directed more than a dozen others. “It’s the perfect song for Morton’s message about stepping up and making a difference. We shot the video in a single moment to bring this feeling to life. We hope it helps inspire people to use their moments wisely."

The video (below) first features more than 325 startling, meticulously choreographed events as they occurred in real-time, in 4.2 seconds — with the band’s members bravely appearing amid exploding pottery, water balloons, paint and guitars. Then it goes into slow motion to backtrack for a close look at how each of the effects played out.

Morton Salt’s sponsorship presence in the video is limited to the end, where the Morton Salt Girl image is shown, along with the message “It only takes one moment to make a difference,” and the link to the Walk Her Walk campaign area on the brand’s site.

The video — which recorded more than 4.6 million views on YouTube within its first five days — is also being shared across Morton and OK Go’s social channels (the brand’s include Facebook, Twitter, Instagram and Snapchat). On Nov. 23, Morton  launched a paid search campaign to support the video’s launch and drive viewers to the campaign site. In addition, it’s running native and video placements on news, entertainment and music sites targeted to Millennials.

The video’s popularity seems more a given than a surprise, based on the success of previous OK Go efforts. For example, a 2006 video co-directed by Kulash his choreographer/film director sister Trish Sie, “Here It Goes Again,” won a Grammy and has pulled more than 34 million views on YouTube to date.

Nor is sponsorship of an OK Go video unprecedented. In 2010, State Farm insurance provided funding to help the band secure embedded distribution rights from EMI for the “Rube Goldberg machine” version of “This Too Shall Pass,” which incorporates some elements with State Farm’s logo. That video also won awards and went viral, generating more than 54 million views to date.

The “Walk Her Walk” site features the official “The One Moment”music video, and also videos shot against the same backdrops that feature five young adults — dubbed “difference makers” by Morton Salt — who started innovative nonprofits after being inspired by a defining moment in their lives.

The brand reports that it is supporting these organizations by promoting them through the site, branded content and video series, out-of-home advertising and exposure across digital and social platforms.

On “Giving Tuesday” (Nov. 29), Morton Salt also announced grants for each of the five nonprofits, including donations of art and other educational supplies, fresh water wells, a music studio, and health-and-wellness kits. Another video on YouTube shows the organizations’ founders accepting the grants.