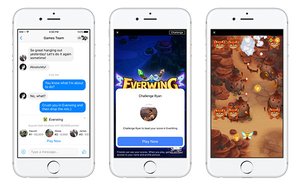 On Messenger, Instant Games can be accessed through a new game controller icon just below where users typically type a message. There, users can find score-based games, leaderboards, and group-thread conversations to compete against personal contacts.

Designed as a HTML5 cross-platform gaming experience, joining Instant Games should be a no-brainer for developers, according to Alissa Heesang Ju, a product manager Facebook.

“Using only one build that will run in Web view, developers can easily deploy their Instant Games across multiple platforms,” Ju notes in a new blog post.

As part of the platform, developers then have an opportunity to reach Facebook’s 1.79 billion users -- many of whom make up Messenger’s billion or so users.

Facebook News Feed posts also include the “Instant Play” call-to-action to help drive distribution and discovery of new games. Presently, there are 17 Instant Games now available to play, with more to come.

For Facebook, the move is part of a recent refocusing on games. Earlier this year, for example, the social giant enlisted Unity Technologies to offer more tools and services to game developers.

With the help of the game engine, Facebook set out to build a downloadable desktop gaming platform, which will let publishers offer iOS and Android games via desktop and mobile.

As of August, Facebook boasted some 650 million monthly active gamers. Last year, it paid out more than $2.5 billion to Web-game developers alone, according to a recent estimate by Jack King Choi, a product marketing manager at Facebook.