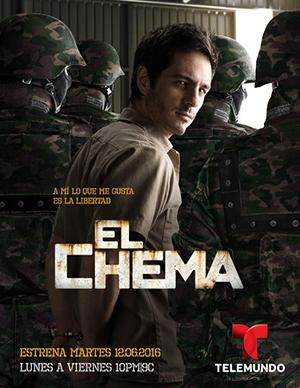 Developed in-house with Telemundo's digital and marketing divisions, the campaign centers around "The Chema: A 360 Escape” to give fans the opportunity to undertake a daring tunnel escape from a high-security prison. They can access the experience via regular screens on desktop, mobile or with a VR headset.

Telemundo also partnered with Facebook and YouTube to release the experience across those social platforms. The components of the VR experience are in Spanish in order to be true to the language of the show´s characters.

"This was a very challenging project, especially with such a new high-end 360 technology that has never been done before on Spanish-language television," says Aileen Merciel-Angulo, SVP marketing and creative, Telemundo. "One of the biggest hurdles was the integration between live-action 360 video and realistic 360 CGI environment in an action-packed immersive experience."

For those that don't have VR capabilities at home, Telemundo is hosting pop-up activations across multiple cities including Los Angeles, California at Stonewood Mall; Houston, Texas at Plaza Americas; Bronx, New York at the Mall at Bay Plaza; and Chicago, Illinois at the Gurnee Mills Mall.

The network also released an online preview of the series on Telemundo.com, VOD and the Telemundo Novelas app titled “capítulo cero” (chapter zero). The preview gives fans a look at El Chema’s backstory.

These executions are designed to target younger viewers to the network. "Our audience has expressed excitement on both the Chema story and the fact that we would introduce this new program in such an immersive and progressive manner," says Peter Blacker, EVP, digital and emerging platforms, NBCUniversal Telemundo Enterprises. "Our focus on Generation M- Mobile, Multicultural, Millennial, has led us into these new forms of storytelling and our audiences and sponsors continue to crave more of it."

He added that the VR material includes both live-action and CGI scenes. “Using digital and social insights we were able to identify which type of experiences our audience is craving and on what platforms."

One week after launch, the campaign has generated over 1.2 million views on Facebook and almost 500,000 views on YouTube.

This execution is just the latest project Telemundo has developed to push the envelope and raise standards of Hispanic media marketing, says Merciel-Angulo. Other efforts include a  Giphy media gallery for "Señora Acero" season 2 (Woman Of Steel) and an interactive game for "El Senor de Los Cielos" season 4 (Lord of the Skies).

“El Chema,” premiering Tuesday, December 6 at 10 pm, is a spin-off of the series “El Señor de los Cielos.”  The season four finale for that series on July 18 ranked as the #1 most social primetime program in broadcast across all networks - regardless of language - and reached 4.57 million viewers.