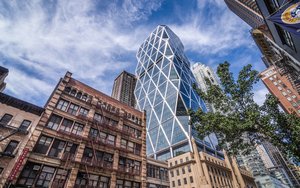 Hearst is combining the beauty, fashion and entertainment departments of five of its women's print magazines -- Cosmopolitan, Seventeen, Redbook, Woman's Day and Good Housekeeping -- in January.

A Hearst spokesperson told Business of Fashion: “We have long believed that collaboration is the key to ongoing creativity and innovation, and we've seen its success in action over the past four years… Brands refine their individual points-of-view, and dynamic editors expand their skills and talent to the benefit of all.”

Hearst has not yet commented on whether these changes will result in layoffs or affect its other titles.

Hearst is not the only big media company to consolidate editorial teams, likely an effort for publishers to reduce costs. In October, Condé Nast CEO Bob Sauerberg announced plans to share resources of its copy/research, editorial, creative, business and technology teams across its portfolio of brands. Some staffers are dedicated to a particular brand, while others float across titles.

And last year, some of Teen Vogue's top executive responsibilities were given to Vogue. Self's operations and social media teams were combined with Glamour's in July; last week, it was announced Self would publish its last print issue in February.

Meanwhile, Time Inc. eliminated the “publisher” title at its magazines this summer and grouped its titles into one of four editorial divisions, each overseen by an editorial director.