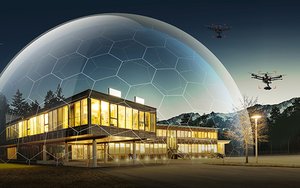 Connected devices in the sky might not be as connected if they fly near businesses using a new ‘drone defense’ security system just launched.

The system by Deutsche Telekom comprises video cameras, radio frequency scanners and microphones to detect objects in the sky. The software running the system can analyze a detected object to determine whether it is a drone and, if so, its make and model, according to DT.

"Over the last few months, Deutsche Telekom has extensively evaluated and thoroughly tested equipment from the most important manufacturers of drone detection and defense systems,” said Dirk Backofen, soon-to-be head of DT.

“We are bundling the best of the technologies under the control of lead partner Dedrone for our Magenta Drone Protection Shield."

Upon detecting a possible threat, the system can be configured to notify the business immediately or take further action to disarm or disable certain functionality of the drone.

Although prior authorization would be needed depending on local regulations, businesses could then jam the frequencies controlling the drone to disable it entirely.

Other possible actions include blocking just the photo and video capabilities of any on-board cameras so drones can’t transmit images of the property and creating a no-fly zone geofence around the property.

On the other side of the drones and security equation, a team of researchers recently used a drone to remotely hack smart lights in an office building.

The researchers flew a wireless device close enough to the building to transmit malware into the Philips connected light bulbs inside, which then transmitted to adjacent bulbs indefinitely, creating a network of bulbs that could be controlled by the researchers.

The security vulnerability has since been communicated to Philips.

Dedrone, the company responsible for the core functionality of DT’s security system, has also implemented its anti-drone capabilities at Citi Field in New York as well as recent presidential debates.