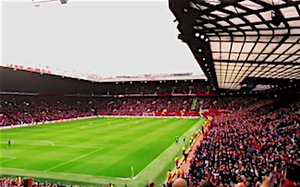 NBC Sports, which has a burgeoning broadcast property in the English Premier League, is incorporating elements of a popular property from another network for a campaign to rebrand and relaunch “Premier League Sunday.”

The multimedia effort, handled in-house by NBC Sports, is anchored by a 30-second spot that is saturated with sights, sounds and emotions from HBO’s “Game of Thrones.”

The opening shot of the spot essentially recreates a map of the fictional Seven Kingdoms of Westeros and the continent of Essos but re-envisioned as the clubs of the EPL.

Scenes of a dark, forbidden landscape morph into castles representing the clubs, complete with flags flying, people cheering and warriors competing on the soccer battlefield for the ultimate crown.

“This is not just sport,” a voiceover says. “These are not just teams. And these are not merely the best clubs in England. They are the great Houses of Football. Welcome to Premier League Sunday. Where city battles city as they march toward laying claim to the crown.”

NBC Sports will air a triple-header of matches on Dec. 11 (beginning at 7 a.m. ET) on NBCSN featuring Chelsea, Liverpool and Manchester United, three of the most popular soccer clubs in the world.

According to NBC Sports, the campaign is intended to reinforce the idea that its EPL coverage is “appointment TV” in the same context as “Game of Thrones” as well as its own NFL “Sunday Night Football” broadcasts.

“The Premier League is one of the great properties for NBC Sports, and there are great people working on the creative side,” Jennifer Storms, CMO for the NBC Sports Group, tells Marketing Daily. “If you follow the numbers, you see that we are building viewership each season, and with NBC Sports as the exclusive broadcast partner in the U.S., you will see those numbers continue to rise.”

NBC Sports Group first signed on to cover the EPL for the 2013-14 season via a three-year pact valued at about $250 million, according to industry analysts. The alliance was extended in 2015 to run through 2021-22, a deal valued between $800 million and $1 billion. Fox and ESPN were also in the bidding.

NBC Sports’ coverage of the 2015-16 season set a record for the third consecutive season by reaching more than 36 million viewers, an increase of 26% over the prior year’s 28.7 million. The average number of viewers topped 514,000 per match, also a record, according to NBC Sports.

The EPL’s popularity is not limited to broadcast. The 2015-16 season saw 613 million minutes streamed and 2.6 million unique users online via NBC Sports Live Extra, up 118% and 26%, respectively, from the previous season, according to NBC Sports.

This season, similar to NFL telecasts, EPL viewership has been down to date, but also like NFL telecasts, NBC Sports anticipates a rise in numbers as the playoffs approach.

On Nov. 27, as part of its coverage of the current EPL season, NBC Sports borrowed another HBO platform when it aired the first of a four-part “Hard Knocks”-type series, “Behind The Badge,” which takes a mostly unfiltered look behind the scenes at EPL club Watford FC. (Episode 3 is scheduled for Dec. 11 and Episode 4 for Dec. 18.)