Who Watches The Watchmen: A Conversation With Former Nielsen 'Watch' Chief Dave Thomas 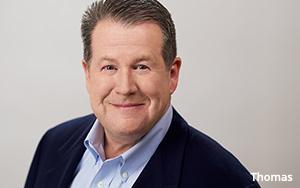 During his tenure as president of Nielsen Media Client Services, Dave Thomas was responsible for the marketing and media research giant’s “Watch” operations. He was also the only person present on the floor of the New York Stock Exchange for the first day of public trading during two different Nielsen IPOs.

After retiring from Nielsen, Thomas formed strategic consulting firm Thomas & Dennler LLC in 2011, playing a key, behind-the-scenes role advising media companies ranging from startups to some of the biggest and most established. In the following interview, Thomas shares a little of his secret sauce.

Media Daily News: So, tell us about your consulting practice.

Dave Thomas: Well, the initial conceit of the business revolved around the premise that there were a slew of emerging companies in the media space with newly minted technology that could benefit from guidance helping them to navigate the rocky shoals of the media industry’s existing infrastructure. By doing so, we believed we might enable them to better understand the vested interests which prevail in the industry, allowing them to better exploit the advantages which their technology ostensibly supplied.

MDN: Can you mention any of the companies with whom you have worked?

Thomas: Sure, we’ve taken on assignments for outfits like Flurry and Adapt, in both cases using our familiarity with the existing infrastructure to help them make further inroads within their respective spaces.

MDN: Both of those companies have been acquired -- by Yahoo and AOL, respectively. Have you worked with any others like that?

Thomas: Not quite, and I should point out that both firms had well-established and successful business models long before our engagements with them began. In both cases, our work with them helped advance initiatives that were already underway.

MDN: Are you working with any earlier-stage startups?

Thomas: Sure. We have been working for some time now with a startup in the digital space, ListenFirst Media (www.l istenfirstmedia.com), whose business seeks to help marketers make sense of social media -- how to evaluate it, how to merchandise it, and offering insights into which channels afford the best opportunity to influence key prospects for that brand. For example, in the media space, Facebook may be more influential than Twitter for a particular program, while the reverse may be the case for a different program. And in some cases, it’s actually YouTube or Instagram that is most impactful. That’s why offering a comprehensive view of social media activity is critical.

MDN: It sounds like you are mainly advising media startups?

Thomas: Not exclusively. A major portion of our practice revolves around our advising media clients vis-à-vis their negotiations with industry vendors.

MDN: By industry vendors, could that mean, for example, Nielsen?

Thomas: As a matter of fact, it could.

MDN: Can you elaborate?

Thomas: Absolutely. Typically, the largest budget item for which a media company’s research director bears responsibility is their contract with Nielsen. Not surprisingly then, the task of negotiating that contract, which can easily entail hundreds of millions of dollars over the contract term, falls into the lap of that research director. Given the enormity of the stakes involved, any responsible executive saddled with that task is going to devote considerable time and effort to that initiative, which, incidentally, he or she is expected to take on while still maintaining responsibility for his or her normal day-to-day workload. Not only is assuming responsibility for that task apt to serve as an enormous distraction, it’s also burdening that executive with a task well beyond his or her normal comfort zone.

Just think, perhaps twice a decade, those folks are asked to negotiate a deal for research service, service still considered essential to achievement of planned revenue targets. Meanwhile, they are expected to negotiate such deals with folks aligned with the other party to the negotiations that are continuously engaged in the practice of negotiating this and similar deals. It’s akin to asking a Pop Warner team to take on the New England Patriots and expecting a close competition. Under the circumstances, it’s unrealistic to think that that company will secure the most favorable terms it might attain. Our involvement majorly redresses that fundamental imbalance, leveling the playing field so that the focus can be on securing terms which advantage that specific client competitively.

Thomas: Of course they can, and often they do. We welcome the participation of procurement folks in the process. Often their generic experience offers relevant insight into addressing impasses which can sometimes surface, particularly when the transaction is being papered and a contract prepared. Typically, though, the influence of procurement personnel in these specific circumstances is limited due to the highly specialized nature of the negotiation, and the leverage a vendor with a unique market position can assert.

MDN: Is “unique market position” code for a “monopoly?”

Thomas: Your terminology, not mine.

MDN: Nielsen must love it when you’re involved?

Thomas: You know, when I left Nielsen, I told Dave Calhoun, the CEO at the time, that I anticipated making that part of my consulting practice. I pointed out to him that I thought my involvement in the process might actually have some benefit to Nielsen in that the most protracted, difficult negotiations -- those with real potential for engendering lingering bad feelings between Nielsen and a specific client -- most often arose when that client entered the process with unrealistic expectations. Our involvement can ensure that expectations are more reasonably managed.

MDN: What does that mean?

Thomas: Well, we point out to them the leverage that Nielsen enjoys. We let them know that if their goal is securing double-digit declines in fees, they’d perhaps be better off seeking assistance at Lourdes or Fatima, not from us. Our emphasis is helping them to maximize the value associated with the deal they ultimately strike, the measure of which is not restricted to what you pay necessarily, but rather extends to what you get for that price. While in light of their market position Nielsen may be legally obligated to treat its clients equitably, it is not required to treat them equally. The two terms are not synonymous, and wise clients -- and certainly we believe those who engage our services qualify in that regard -- understand the distinction.

MDN: Speaking of Nielsen, what is you view of the company today?

Thomas: Well, as is always the case given Nielsen’s unique role in the industry, the company faces some significant challenges. Moreover, those challenges have no doubt been exacerbated by the downward guidance Nielsen recently supplied in light of anticipated softness in its marketing or “Buy” segment. That said, when I think of Nielsen’s franchise, I’m reminded of the work of the late political scientist, Edward Banfield. Banfield likened society’s pursuit of improved standards of living to greyhounds at the dog track, relentlessly pursuing a mechanical rabbit which will never be caught. To some degree that is Nielsen’s fate as well. As they meet new measurement challenges, new technologies are constantly emerging, impacting consumer behavior and with it client requirements. As those new requirements are met, inevitably a new crop appears on the horizon and the cycle continues.

I do think Nielsen deserves credit for the progress they have made in delivering on the promise of Anytime, Anywhere Media Measurement, to the extent that it has become reality.

I have a great deal of respect for Mitch Barns, their CEO. I think he’s smart, hard-working and sincere -- all essential requirements for effective leadership at most companies, but certainly at Nielsen. Steve Hasker, Nielsen’s COO, is another executive for whom I have enormous respect. Steve’s tenure prior to Nielsen, leading McKinsey’s media practice, affords him considerable insight into the media business and its likely future direction, insight which has informed Nielsen’s progress in digital measurement.

Now they have to undertake an overhaul of the “Buy” side segment of the Nielsen franchise analogous to that which has been accomplished on the “Watch” segment, so that their marketing clients might similarly benefit from a more comprehensive view of the sales performance of their brands, considered in the context of that brand’s competitive cohort. I have confidence those two, in conjunction with the rest of the Nielsen team, will be able to pull it off.

MDN: What current industry developments do you find most intriguing?

Thomas: The contretemps surrounding the issue of transparency I find fascinating. It’s hard for me to imagine a situation in which an agency/client relationship fails to benefit from openness. While at Nielsen I long advocated for more active advertiser involvement, reasoning that the stakes surrounding measurement are too high to warrant delegating research decisions exclusively to the province of researchers.

While I was at Nielsen, we invited George Ivie to speak at our annual 360 Client Conference, which includes both marketing and media clients, so that he might pitch advertisers on participation within the MRC. I think the old Sy Syms chestnut, “An educated consumer is our best customer,” still has merit.

I think advertisers have to recognize that the constant erosion of agency margins is bound to lead to unintentional, and perhaps undesirable, consequences. Back in the Pleistocene era, when agencies operated on full commissions, clients benefitted from agency loyalty and a willingness to initiate plus projects that were perceived as offering potential benefit to a favored client. Today, in a business climate characterized by flat fees where procurement rules, adhering strictly to tasks described in the specs of their agreement with a client is essential if an agency hopes to achieve an acceptable margin. When all is said and done, you get what you pay for.

MDN: What is your view of agency audits ?

Thomas: Well, in light of the stakes involved, the notion of regularly incurring independent audits of media plans/buys would certainly seem a sensible practice. I’m not sure any major agency conducting themselves properly would balk at their client pursuing an independent audit, particularly if provisions have been made to compensate the agency for any additional expenses they might incur while accommodating the initiative.

Just as in a financial audit, a media audit that confirms plan goals were achieved at or below budget, while exceeding relative performance norms within the brand’s competitive cohort, is exceedingly valuable. It’s worth noting that results of that sort should also afford the agency a powerful tool with which to negotiate favorable fees on an ongoing basis.

One issue with some auditing firms operating in the media space is that all too often their audits become veritable witchhunts --  desperate attempts to highlight, and indeed, to exaggerate, criticism of the agency so as to ensure repeat assignments from the client.

It’s important to keep in mind that the media plan that could not be subject to some level of criticism after the fact has yet to be written. Just as in every ballgame, even the most astute of managers -- a Francona or a Maddon -- is subject to second-guessing after the game’s final out.