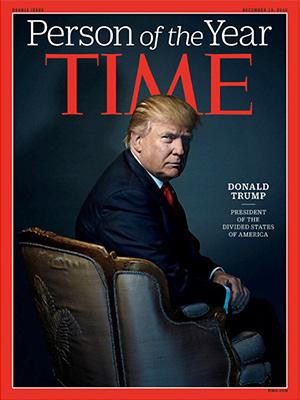 There was little surprise in Time mag’s “Person of the Year,” but the newsweekly made it official this morning unveiling the cover of its Dec. 19th issue (on newsstands Friday). Popular vote aside, President Elect Donald Trump earned this week’s “Cover Story,” because he clearly was the bigliest player of the year. Time’s No. 2 pick: Hillary Clinton.

“This is the 90th time we have named the person who had the greatest influence, for better or worse, on the events of the year. So which is it this year: better or worse?,” wrote Time Editor-in-Chief Nancy Gibbs, explaining: “The challenge for Donald Trump is how profoundly the country disagrees about the answer.... 2016 was the year of his rise; 2017 will be the year of his rule, and like all newly elected leaders, he has a chance to fulfill promises and defy expectations.... For reminding America that demagoguery feeds on despair and that truth is only as powerful as the trust in those who speak it, for empowering a hidden electorate by mainstreaming its furies and live-streaming its fears, and for framing tomorrow’s political culture by demolishing yesterday’s, Donald Trump is Time’s 2016 Person of the Year."

magazines, news, publishing
1 comment about "Cover Story: 'Time' Person Of The Year".
Check to receive email when comments are posted.
Next story loading