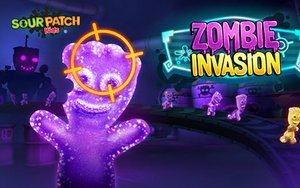 As the company announced this past May, its strategy calls for partnering with studios and media companies to create content that not only reaches and engages elusive or advertising-averse consumers but is “good enough to make money.”

Sour Patch Kids partnered with Montreal-based game studio Lucky Hammers to create the 90-minute, multi-level “Zombie Invasion” — which, according to Mondelez, is the first VR game from a candy brand.

“By partnering with a studio with technical expertise in gaming development, we can leverage Sour Patch Kids’ equity and marketing scale” to monetize the medium through paid purchases, in-app purchases and in-app advertising, Jim Poon, media and content manager at Mondelez, tells Marketing Daily.

Being the content producer will also enable Mondelez to generate revenue from distribution rights and brand integrations, as well as to “form a deeper connection with its audience across its most popular brands,” Poon points out.

Teens and young millennials are tough to engage via traditional advertising, but heavily into gaming, and mobile gaming in particular.

“Gaming is a perfect medium to share more immersive, long-form storylines about the Sour Patch Kids,” Poon says. “Having someone spend time actively choosing to play our games is much more engaging than passively showing someone an ad while they’re doing something else. It’s also a key consumption occasion: Consumers snack on Sour Patch Kids to provide a pick-me-up during gaming sessions.”

Virtual reality “is the new frontier in gaming, and it offers the brand a unique way to connect with and captivate our audience by transporting them into imaginary worlds and changing the environment around them,” Poon adds. The fully immersive technology “lets us build a deeper relationship with consumers by letting them experience what it’s like to ‘be’ a Sour Patch Kid.”

In “Zombie Invasion,” players virtually step into the shoes of a Sour Patch Kid and control a tower to defend against a zombie invasion, while investigating the mystery of where the zombies came from.

But the brand isn’t going VR-exclusive. Offering a suite of free and paid games playable on different platforms and devices allows Sour Patch Kids to reach its full target audience and cross-promote them to keep fickle game players engaged. “Players tend to get bored and move quickly from game to game, Poon notes.

While declining to share stats for the Google Cardboard VR demo game, he reports that the “Candy Defense” game has logged about 280,000 hours, or 30 years’ worth, of playing time since October.

Asked if such engagement translates to incremental product sales, he again declined to share research specifics, but said that the games “make a difference for the brand.“

Sour Patch Kids is supporting “Zombie Invasion” with owned and paid social media, as well as advertising on the Google/YouTube video network and the Oculus Store.

It’s also leveraging its relationships with gamer influencers. For instance, through an existing partnership, “Zombie Invasion” will be fed into Twitch users’ streams, so that fans can watch others play the game.

Still, games are “just one of the many ways Sour Patch Kids is integrating into our consumer’s lifestyle and lives as a part of Mondelez’s larger media content monetization strategy,” says Poon.

The marketing strategy is “to make the Sour Patch Kids iconic within pop culture by integrating them where our consumers spend time,” he says. “It’s about raising awareness and engaging with our fans where they are — whether it’s online watching digital video, on social media, or through music or gaming.”

Sour Patch Kids will “continue to tell the brand’s ‘sour then sweet’ stories in new spaces” as technology and its audience’s interests continue to evolve, he adds, noting that the brand was, for instance, among the first to experiment with Snapchat Spectacles.